Archer Record Pressing Master Numbers: A Number of Names versus Cybotron in the Ever-Confusing World of Record Chronology

Archer Record Pressing began in Detroit in 1965. The original location was 6552 East Davison and after a few years the operation moved to 7401 East Davison where they still press records today. The building is, without question, one of my top 3 favorite places in Detroit. The actual pressing of records is a holy process to me. So the feeling I get walking into Archer must be analogous to that my grandma got when she walked into St. Peter's Basilica. 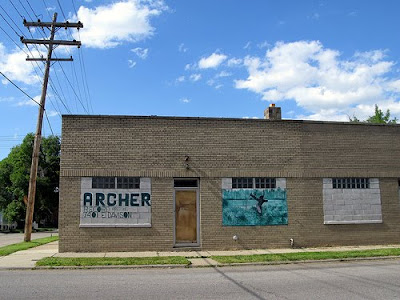 (this folk art is my Michelangelo)
In it's forty-plus years of operation, Archer has been the go-to for local Detroit labels and musicians self-releasing music. The stuff pressed there dizzys the mind...Sonic Rendezvous Band, Death, Tribe Records, Von Records, Ollie McLaughlin stuff, Touch and Go, Blue Rose Records, Metroplex...I could go on, but I think you get the point. Such a repository of local music history, lore and juju does not exist outside of Hitsville.

Any recording brought into Archer without a catalog number (and occassionally those with one) will be assigned an AR number for internal reference. After seeing these over and over again and realizing that they are issued sequentially, it became evident that if one compiled a large enough list of these numbers, you could feasibly start to date records that were previously undated or in question. So here's my contribution to that process. Any years or dates come directly from Archer invoices of information listed on the label of the actual record itself.

AR-6212 is "Sharevari" by A Number of Names, widely considered to be the first Detroit techno release. Invoice #6212 only lists mastering, processing (plating) and test press charges. The second Detroit techno record, "Alleys of Your Mind" by Cybotron, is invoice # 6237 (invoices and AR numbers are interchangeable, but because "Alleys" had a customer-supplied catalog number of 107034 it fails to have an AR number on the label or its run-out grooves).

The "Alleys" invoice is dated 10-29-81 and gives a quantity of 1000 initial copies, making it literally twenty days after the "Sharevari" invoice. BUT...it seems that actual PRESSING charges for "Sharevari" don't show up until AFTER the "Alleys" pressing charges.

I remember hearing stories about "Sharevari" debuting on-air during the Electrifyin' Mojo radio show and Mojo even giving the group their name. So it's possible (but not necessarily probable) that "Sharevari" was recorded first but languished for awhile before it was actually pressed. In that time it seems Cybotron flourished and recorded their own debut and POSSIBLY pressed it before A Number of Names pressed/released "Sharevari".

There were also numerous invoices (referenced above) that show "Sharevari" being repressed while I didn't notice any subsequent invoices/orders for "Alleys".

Either way, it's fascinating that both of these groups were germinating at the same time, seemingly unaware of each other and their releases being the initial salvo in the blast of Detroit techno. The mechanics of when the songs were recorded, compared to when they were test pressed and/or released is merely insight into a previously undocumented side of it all.

Disclaimers: None of this information is definite. Most of it is gleaned from records in my personal collection, listings found on eBay, or time briefly spent combing through Archer's old invoices. Some numbers can prove difficult especially if they were repressed later with different label art/years (hence the A-tack VU Records seeming out-of-place that's causing me to pull out my hair). Please feel free to add any records you may have in your collection or have AR numbers for (found either on the label or etched in the run-out groove) in the comments and I will add it to the master list.
Posted by cassdetroit at 7:46 PM

Email ThisBlogThis!Share to TwitterShare to FacebookShare to Pinterest
Labels: "a number of names", alleys of your mind, cybotron, sharevari

I got nuthin, Boss.

Other than to say I dig your mission. You definitely need to write a book about exactly where you are in the matrix.

benj- i just grabbed a stack of 45's for fun.
pulled this one :
AR 5144 - SOL RECORDS sound of love will you be ready b/w celebration

that quixotics mentioned here 45 was in the same stack. maybe i'll organize my stupid records.

oh yeah i have an extra first press 'number of names' 12 too, if yoo wanna trade for somethin.
luv
dion

i have been flying to Detroit since 16 years old, buying some of the ones listed, i am catalogging my 12" after a major move, i will submit some to fill that list up! cool site, glad to see some still making Progress in Detroit! Nice.