ATP 2008 The Year of Touring is Finally Fucking Over...

(Exactly one year ago today the Dirtbombs started off 2008 with a record release show at the Magic Stick in Detroit. There was an eviction notice on our practice space that day. Surprisingly, we didn't get kicked out and besides omitting "I Hear the Sirens" from our set of the entire album front-to-back, everything went off without a hitch.

After the show, Ralph, the night manager of the Magic Stick appeared backstage with champagne to celebrate the occasion. It was unexpected and decidedly classy and honestly, the only time in my life I've ever thought alcohol tasted good. The Magic Stick has always done right by the Dirtbombs.)

Seemed like we drove all day to get to Berlin after dark. I bought a monkey calculator along the way…equally offended and enthralled by the tin toy's mere existence. The show was lively and refreshing…the crowd mobilized and vibrant was a welcome reaction. Zack jumped into the mass at some point and came down hard on his ankle. I kept telling the dude he should be doing pre-game stretches.

After the show we're backstage and Zack's looking for some ice for his ankle. Somehow this leads to an argument between him and Ko. Then, with a bottle of Coke in-hand, he was looking for a bottle opener. Unable to find one, he slammed the bottle to the ground out of frustration and it exploded into hundreds of tiny little pieces. Part of me thought, "Wow…barely been on tour two months and he's already turning into a rock star." I said nothing, as I'm wont to do in such situations, and an argument between Z and Pat soon developed.

Their argument didn't really resolve. I talked to some fans onstage after the show and some dick literally lights a match under my ass. I go off on him, posing hypothetical parental questions like "Do you think that's funny?" and "What's wrong with you?" until I angrily grab his arm and forcibly remove him from the establishment.

At the hotel Pat knocks on our door asks Zack into the hallway and picks up where the argument had left off. I'm nervous because the volume of their exchange is too much for a modest German hotel hallway at 3am, but also excited because it's so seldom that actual verbal confrontations happen in this band. I forget how it ends, but I was clearly entertained for a few minutes.

The Paradiso and its surrounding neighborhood in Amsterdam are so familiar at this point that they fail to feel like foreign land. After soundcheck Mick and I do an interview for an upcoming documentary titled "It's A Long Way to the Top…" and our general demeanor is one of negativity. 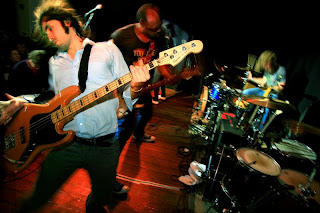 The show was fine. Spent time afterward looking over the prospective layout of an upcoming White Stripes fan website and then hoofing it over to our hotel. Had an expensive telephone call and, unable to sleep and the Internet failing to interest me, I went down early for breakfast, at lots of toast, cereal and orange juice and then tramped around town.

(Live photo from Amsterdam...the best Zack has ever looked on-stage)


Hit up my favorite antique store and bought some cool prints from the early 1900's. Found a familiar vintage clothing store and bought a new striped Breton sweater made by the same company (Pop) that made the Dirtbombs' matching jackets from the cover of If You Don't…

Basically, time off in Amsterdam to walk around was refreshing and therapeutic. I could gather my thoughts and scatter them simultaneously. The layout of the city and relevant landmarks (Paradiso, Febo, massive postcard store, outdoor stall selling tulip bulbs) are permanently burned into my brain, yet I'm still able to explore and discover new places.

Our final show in Antwerp was mostly forgettable. I do remember ordering a steak "medium-well" and having it served to me bloody. I also remember a guy in a wheelchair at the front of the stage, totally into our jam.

On our drive through the UK back to London a solid argument about the merits of liquor-license requirements in the city of Detroit and heavy-handed enforcement thereof. We find Zack is not one to back down or let go of an argument and in the midst of all this we were pulled over.

The constable who stopped us expressed concern that our vehicle was overweight. He checked the limit on the inside of the driver's door and shook the frame of the vehicle a bit with his hands. We all had a good laugh and then followed the cop back to the nearest weigh station where we indeed were a good 800 pounds overweight.

Zack "Smash the State" Weedon remarked "I bet your on the cops side, right?"

According to our tour manager Matthew, if our van in this situation was overweight, then almost anyone who ever rents any van of the same size is overweight. We barely had anything with us. Jeez, and SVT alone would put that shit in the red. As we left the weigh station Matthew says we have to go to a car park and somehow jettison the offending 800 pounds before we can continue on our way.

What.the.fuck. How in the hell are we supposed to do this? 800 pounds? That's like a drumset and two bass players? What in the shit are we supposed to do to get the rest of the offending weight home? We certainly can't discard the Guinness, Matt would throw a fit. We are racking our brains trying to figure out how to make this work, all the while Matthew's still driving along the motorway. After a good twenty minutes or so, he lets us in on the fact that he was fucking with us. Well-played.

We had minor time to kill in London and I used it to walk around a street market and buy Jammie Dodgers. From there we walked to the Agency Group's offices and got paid in a room lined with Pink Floyd gold records. Off to Finchley to drop off the gear and then reconvene at casa de Viner to tie-up the rest of our loose ends.

Ma and Pa Viner were back from the hospital where their first grandchild was just born that day. They wanted to celebrate and popped open the celebratory champagne and fancy Italian cheese. We stayed at a hotel outside Heathrow that night, took a shuttle to the airport the next morn and I personally bought $60 worth of UK candy bars before an easy flight to an uneasy home. But really, I think of the tour ending there in the familiar kitchen in Finchley, everyone happy and congratulatory with a toast of champagne, just like it had started.

Trips to the Emergency Room – 1
Trips to museums – 2
Significant, reconsider career-path injuries – 3
In-Store performances – 3
Records released – 5
Tour managers – 6
Shows played – 156
Shows played in NYC area - 9
Bands played with (excluding festivals) – 134
Days off on tour – 29
Flights – 26
Countries visited – 19
Records remaining unreleased – 2
Most people crammed in our van at once – 9
Continents we hung out with the guys from the Datsuns on – 3
Chipped teeth – 1
Trips to the beach – 3
Ferry rides – 11
Times pulled over by the police – 3 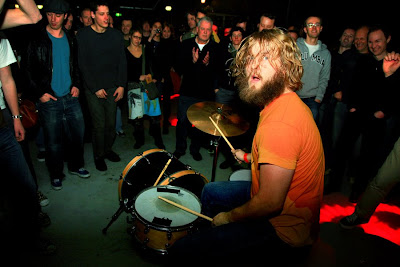 (don't look back in anger)
Posted by cassdetroit at 4:32 PM 3 comments: