Every Thought I Have Ever Had About the Melvins' "Lysol" Album 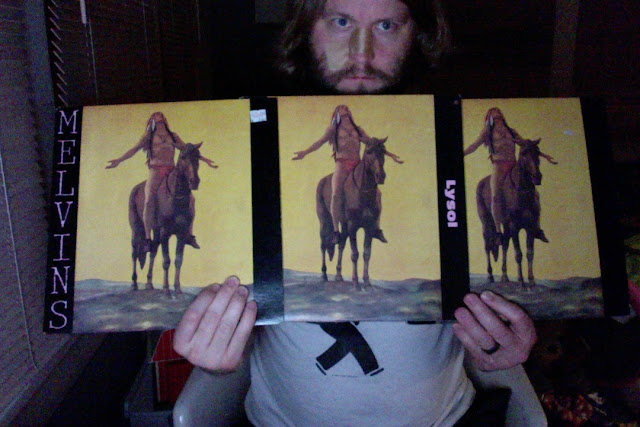 Writing late at night feels like the first time in forever, but with the Discogs livestream DJ set tomorrow, I need to be fully focused on that task at hand so knocking this one out with a doozy.


For nearly twenty-five years, the Melvins have consistently been one of the bands I have most enjoyed. Amongst a catalog that is just too vast to completely comprehend (let alone listen to or own) Lysol is without a doubt the record of theirs I have listened to more than any of their records.


The music, for starters, is sublimely perfect. Every note, every extended bout of feedback, every snare hit...there is nothing in the entire running time that is superfluous. Each action is essential in serving the larger statement.


Weirdly, when I first bought this record (roundabout July 1996 based on the Car City Records pricing sticker) I always listened to the sides in reverse order. So forever in my mind, the album starts with “Sacrifice.”


Seldom does a cover song surpass its original version. Never does it elevate to the level that the Melvins ascend to with their complete recontextualization of Flipper’s work.  Now don’t get me wrong, Flipper’s version of “Sacrifice” is really, really solid. One of their finer moments. But the Melvins….shiiiiiiiiiiiiit. At various moments of my life this song has fully encapsulated my reason for existing. It is, to this day, my go-to record whenever I’m setting up any new or reconfigured stereo equipment. I just know every last quiver the needle is supposed to make as it glides over this slab of wax, encoded into the dust that vibrates into strings that helix into the building blocks of my form. I may overuse this term (and for that I apologize) but I will absolutely fight to the death when I wholeheartedly exclaim that the Melvins’ version of “Sacrifice” is PERFECT.


The rounded bass tone, the dissonant squeal of the guitar feedback curdling into the song at the 36-second mark, the snare (triggered to a single snare hit sampled from Zeppelin’s “D’yer Maker”) coupled with cannon-strength bass drum, room for those two stutter syncopated with all kinds of personal inflection and style, the whole thing really just being six notes repeated over and over and over for over six minutes, literally getting better and better the louder you play it, the lyrics blatantly anti-war and military industrial complex...I could live inside this song for days.


Follow that with a brief segue into “Second Coming” straight into cover of “The Ballad of Dwight Fry” (both originally by Alice Cooper) and the dusty, Western vibes feel almost anathema as to what I would’ve expected from the Melvins at 14 years old.  But man, it somehow flips the script and just works, bordering on Dust Bowl murder ballad vibes. I am only learning right now, at 1:36am, that Dwight Frye was an actor born at the turn of the century best known for playing maniacal characters in Universal horror films like Dracula and Frankenstein. Still, twenty years later, I am having trouble removing everything here from the Melvins, in my mind it all comes exclusively as their creation.


Good moment for an aside...most copies of this record come with NO information other than the band name and band member first names. When I first sat with a copy freshman year of high school, I had NO way of determining anything about this music, what side to play first, who wrote the songs, just nothing. It was mysterious and alluring and gave me just enough entree to not be that concerned about the lack of context. Not until buying a CD copy of Lysol in 2008 did I realize that the album DIDN’T begin with “Sacrifice”, let alone that there was a song on it called “Roman Dog Bird.” Furthermore, the songs are mastered in a way that they all run right into each other, no telling where one ends or begins, so much so that on the CD it is just one 31-minute-long “megacomposition.” That shit is confusing! But oh so worth it.


The album ends on “With Teeth”, a song centered around a chord progression that I have trouble describing in any way other than optimistic, triumphant or positive. As a vibe that is NOT common from the band by any means, it showcases here well, with little effort it could be some weird half-tone or down-tuned demonic, but if anything, this album is full of odd pseudo contradictions.

Occasional Melvins drummer Coady Willis once said to me “I just can’t believe I get to play ‘With Teeth’ every night. That song is so important to me, meant so much to me when I was younger” and just little things like that, the insight into someone else’s perspective, gave me a wholly new perspective on a song like this.


Circle round to the start of the album, “Hung Bunny” is an anti-song for nearly seven minutes, all wrung out power chords left to dissipate into the ether, drum accents barely punctuating anything, buried vocals that sound like disassembled chanting, avoiding annunciating any words, rather just honed in on differentiating vowel sounds. And THEN, around the 7:50 mark it kicks into an insistent, drum-propelled middle portion limbo, before settling on quintessential instrumental doom-inspiring Melvins 101.


Quickly, without warning, it crash lands into “Roman Dog Bird” And not until now, 2am, twenty four years of listening to the album, do I know that the first damn lyric on the album is “Lysol to get me high”


I didn’t think I could love this album any more. But somehow, with revelations like this, I do.


Another good moment for an aside: the title Lysol caused this album to get tied up in all kinds of legal trouble. The term “Lysol” itself is trademarked, and the then-owners (Sterling Drug) actually sent an undercover operative to the Boner Records (greatest label name ever) warehouse, posing as a journalist. Right before the release, records ready to roll out the door,  Sterling drops the hammer, thousands of copies of the LP and CD need to have the offending words covered with black tape, crossed out with black marker, just completely asinine shit. Ben Swank recalls unwisely removing the tape from his copy as a youth. One of my prized Melvins-related possessions is an original copy without any signs of tape or marker, the title there in all it’s infringing glory. When Boner re-issued the album in 2015, they changed the title to Lice-All which is the perfect kind of clever.


Additionally, I’m just finding out now, at 2:15am, that Lysol was marketed as a feminine hygiene product in the late 1920s and was even utilized to induce abortions for women who could not obtain them legally….giving me a whole new perspective on this album title, which previously I had just thought was a clever, snide response to Nirvana naming their debut album Bleach.


Whether you consider it the end of side 1 or side 2, all is transcendentally immortal. The cover is based on the sculpture Appeal to the Great Spirit, itself already depicted as the logo for the Beach Boys vanity label Brother Records and a Keef Hartley Band album cover...the image signals importance, something greater than us, a resignation of oneself to the higher power, all ideas I sincerely feel are embodied in this recording, while the center labels and printed inner sleeve match in a dizzying red/black/white flower pattern, hypnotic upon closer inspection and the feedback buzzing.


I can honestly say here, without any hyperbole or stretching of the truth, this album is one of the greatest rock and roll records ever made. Top five material. There is no overselling this one. Lysol is absolutely essential to any self-respecting record collection. No excuses. Everything about it is just exemplary.


I just keep thinking back on what it must’ve felt like to have to tape and mark all those original copies of the record...how tedious, how demoralizing, what a set-up to give-up. But if anything, this record is only that much better because of the lore behind it. Getting busted does not stop greatness. Even if it’s 2:55am.
Posted by cassdetroit at 9:55 PM No comments: