Rubye Shelton and Her Enduring Influence on Kanye West 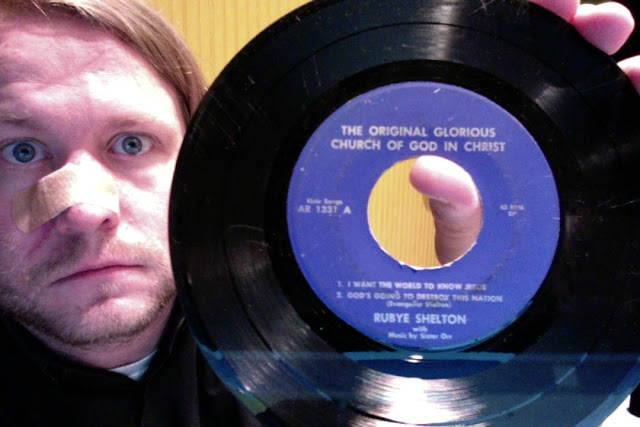 God’s Going to Destroy This Nation +3
scum stats: 500 -1000 pressed I'd guess, good luck finding a copy
The record that got me on the front page of Pitchfork.
I assume by now that most of you have heard the story of the catalog number of this record being referenced in the artwork for Kanye’s new Jesus Is King album. If not, here’s the jist:
https://pitchfork.com/news/kanye-jesus-is-king-album-cover-mystery-solved-by-third-man-records/
In short…I’ve been stockpiling my own database of Archer Record Pressing numbers for the past 11 years. And once I saw Kanye’s art, a week after the album was released, it SCREAMED at me as clear as day “That’s an Archer number.”
But not until NOW did I actually have a copy of the record. I paid a respectable $96 for this wrecked copy on eBay and with my SugarCube system this disc plays like a dream.
(the SugarCube basically removes scratches, pops, ticks, surface noise in real time. CRAZY technology and apparently the one I have is already been surpassed by an updated one. we can talk about this all at a later time.)
Holy shit is this record the real deal. Nothing but voice and tambourine and enough chills to cool the most fiery pits of hell. Released circa 1969/1970, you would not crazy to think it’d been recorded FIFTY years earlier. Raw, emotional…this is EVERYTHING that music is meant to be.
I have no insight as to why Kanye would reference this on his album cover…but anyone with the tiniest bit of discerning taste can hear that this record is worth it’s weight in gold…as evidenced by folks who paid upwards of $800 for this BEFORE it was ever Kanye-touched.
I just wonder if Ye sits around and sings about Rubye "I made that bitch famous."
I’d argue she’s done the hard work here…these songs get MY HIGHEST RECOMMENDATION and it’s been reissued but even that version seems impossible to find. Yeesh.

Part of me wants to frame this sucker, as it holds for me a moment where the absolute nerdiest thing I do in my life showed some sort of value outside of my own brain, but honestly, these songs are too damn good. I need to keep on playing it.
Posted by cassdetroit at 5:57 PM No comments: