Ain’t No Radio Stations Getting Blown Up On My Watch 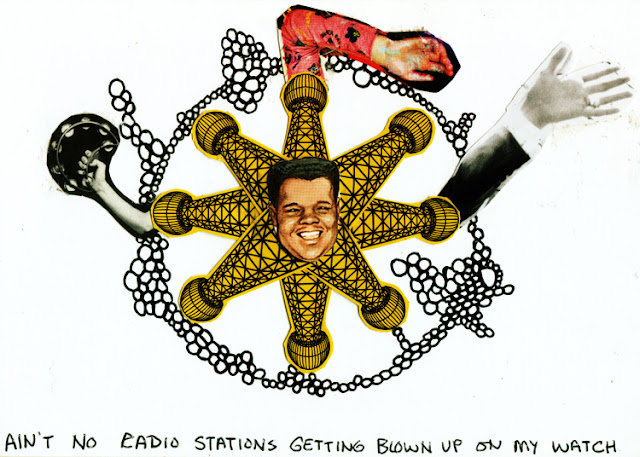 In remembrance of the legendary Fats Domino, here’s a collage I did a few years back for the Johnny Brewton Kut-Up zine. Utilizing almost exclusively materials that were within immediate reach from the desk in my TMR office, my inspiration for this piece came from the first broadcast of Mick Collins’ Night Train radio show around a decade back.

As the story goes, there was a deranged man repeatedly calling and threatening a radio station. Kept on demanding they play Fats Domino or he was going to bomb the place. There was a big to-do, the offender was tracked down and charged with the appropriate crimes. As Mick tells it, no one ever thought to just play some damn Domino. So with all the determination of a man on a mission, Mick proudly declared “Ain’t no radio stations getting blown up on my watch” and launched in to a half hour of music from the master. This is how he STARTS his public radio career. With style.

It is undoubtedly the favorite radio moment I’ve experienced in my lifetime and I was overjoyed to commemorate it in collage form.

Someone actually bought the original of this for something like $75. Insane.
Posted by cassdetroit at 11:44 PM 4 comments: