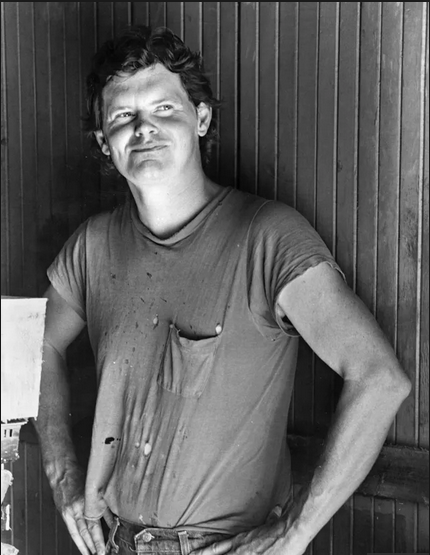 I only ever met Gordy once. As I remember it, I popped-in unannounced at Brian Muldoon's upholstery shop one afternoon probably 2003 or so. This was not uncommon as he and I were playing in a band together at that time (invariably known as the Science Farm, Night Latch, or the Thread Counts based, depending on when you asked us) and as I was attending classes at Wayne State just down the street, I was often in the neighborhood.

We made small talk and he made an explicit point to introduce me to Gordy (despite all the scholarly professional mentions of him as "Gordon" I never heard anyone actually call him by that name). Shy, embarrassed, bothered...almost as if he was struggling to just be polite is how I remember him. We shook hands, he kept his head down, I thought nothing much of it.

Gordy left while I was still there and Brian said "If I would not have introduced you, he would've ignored you and not said a word." Which would've been awkward...as we were the only three people standing there in Brian's backyard.

Later that year Brian and his wife gifted me a copy of Gordy's book and my appreciation has only ever grown from there. Gordy did the cover art for the second Tin Knocker single that I released...something like 7 or 8 layers of polyurethane coated on a single sheet of paper and the edges all disintegrated and demolished and unlike any single artwork I have ever seen (I selfishly kept the gnarliest, most destroyed looking copies for myself...some of them literally had holes in them).

Gordy also did the cover art for the second single by the Upholsterers. An art project if there ever was one, "Your Furniture Was Always Dead, We Were Just Afraid to Tell You" was limited to 100 copies, all secretly hidden in furniture that Brian Muldoon had reupholstered and believed by many to be a hoax until we actually shared the cover art a few years back. At last count I had word that three copies had been found, but none of those people wanted to share any more details than that.

When I was recording my solo album in 2009, I put together a song that was nothing but guitar feedback and an original Bleep Labs Thingamagoop. In hindsight, I would probably go back and remove the Thingamagoop, but that's besides the point. Once I'd recorded the track, the only appropriate title I could think of was "Gordon Newton, 1970." The feeling I got from listening to the feedback was the same feeling when I looked at images of Gordy's early 1970's works of black lithographic crayon on white paper. I also thought, of all the people in Detroit in 1970, Gordy was the one I would most have liked to hang out with at that time.

An example of such works, described as "conveying the sense of motion of the artist's arm and body as he worked...free-floating notations of the speed with which he made them" is the embedded graphic in the Soundcloud player below. Also, that description above is probably my favorite written description of visual art I've ever encountered.

Gordy passed away a few weeks ago and it hurts. I have one of his "Heads" hanging proudly in my living room and since I heard of his passing, I can't stop looking at it. I feel downright lucky to have barely even crossed paths with him. A quote from Marsha Miro, longtime Detroit Free Press art critic and a founder of the Museum of Contemporary Art Detroit (MOCAD) called Gordy the "best artist Detroit has ever produced" and in his passing, Miro reaffirmed that by saying "To this day he's still one of the most important artists who lived and worked in Detroit."

After a brief contemplation on Tyree Guyton, I had to agree. I can't think of a solid counterargument to Miro's statement. The entirety of his oeuvre, as vast and wide-ranging as it is (though best known for painting and sculpture) just seems so intertwined with how my brain understands the city of Detroit. Something about the way he OVER applied color, to the point of it turning to dust, and the specific manner he cross-hatched lines, every time I see it...just speaks to me.

It all may sound a bit trite, but that's how I feel. And deep down inside, art that makes you feel is life-affirming.