"We Can Try For a Boy...Or We Can Just Have the Shaggs" 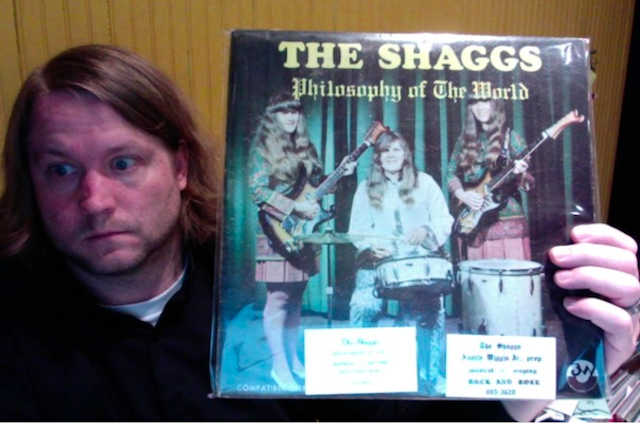 Philosophy of the World

scum stats: probably 500 or 1000 pressed originally, an infinitesimal amount of which remains in existence today

Hands down one of the greatest records of all time. I'm holding an original copy here, but the currently in-print reissue from Light in the Attic will serve you just fine.

The story goes, sometime in the late '60s Austin Wiggin Jr. was told by a fortune teller that his three daughters would become famous musicians. He pulled them out of school, got them outfitted with snazzy new instruments, and motivated them to create.

Their shining moment is "Philosophy of the World" a bombshell of a record there if ever was one. I don't say this to exoticize, but the songs on this album truly sound like they come from a world that has never heard modern popular music before...rather, they'd just heard ABOUT music and then had to divine it from there. Standalone. Unique. One-of-a-kinda. Makes Beefheart sound like Louis Armstrong.

And man is this record polarizing. You either love it or you HATE it. I'm no doubt ride-or-die in the love category, first reading about it in the Rolling Stone "Alt-Rock-A-Rama" book (a BIBLE for me as a teenager) and finding a CD soon thereafter roundabout 1997 or so. The fact that I managed to trade for an original copy a few years back still strikes me as hard to fathom...I had never even SEEN an OG in person before, yet now this is one of the very few records I feel is important enough to be on display in my world. I love it that much.

At first I didn't get it, I just thought these girls didn't know how to play. But it didn't take too long for me to realize the sheer bravery and not giving a fuck-ness of putting a record out of such gargantuan singularity. I'd like to think this type of spirit and potential is deep within everyone, but the infrequency with which it is seen makes true examples of it rare and cherished.

My love for this album is so deep that five years ago when my wife came to visit me in the TMR office with the measured "gender reveal" of a pink cupcake to signify we would be welcoming a second daughter into the family, she said "We can still try for a boy...or we can have the Shaggs."

And just like that, I WANTED a third daughter. I mean, really, who wants to raise a son? We've got three daughters and I collectively call them the Shaggs from time to time. They're just getting their feet wet making their own music. I'm holding off on any visits to fortune tellers just yet...even though, in some weird "so wrong it's right" kinda way, that fortune teller was 100% correct in their premonition to Mr. Wiggin all those years ago.

I feel like there's still SO much to say about this album, but I promised I'd go pick up milkshakes for the staff. So I'll leave it at that.

Posted by cassdetroit at 11:19 PM No comments: