My First Appearance on Record... 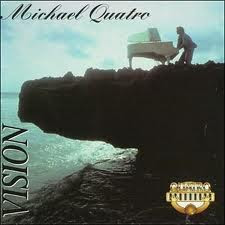 (And if it's not clear, Mike is playing a baby grand piano on a cliff over the ocean...it has to be the ocean, right? No one bothers to do that shit on a lake).
Mike is somewhat known on the East Side of Detroit. He comes from the illustrious Quatro family who also gave us the Pleasure Seekers (featuring his sisters Suzi, Patti and Arlene). He ran MQI (Mike Quatro Inc, 150 Kercheval, Grosse Pointe Farms) and was responsible for booking a large number of the Detroit band's from that era you know and love (Mc5, Stooges, etc). He supposedly had a hand in booking acts for the Cincinnati Summer Pop Festival...the night where Iggy smeared the peanut butter on his chest.
(side note: MQI later became DMA or Diversified Management Agency who released the "Fantastic 5" compilation in 1976 and featured such illustrious forgotten bands like Holy Smoke, Beauteaze, Badge, Ruby Jones and Sweet Crystal. I'm fairly certain DMA was run by Dave Leone who originally started out with the Hideout clubs/record label)
Mike Quatro also made a name for himself as a performer. Rumors at the local grocery store were that he was on Lawrence Welk (or Ed Sullivan?) playing virtuoso piano at the age of 5. Now that I would like to see. It's also worth noting that he titled a solo album "In Collaboration With the Gods" which has to be the least-pretentious name you could ever give a record. 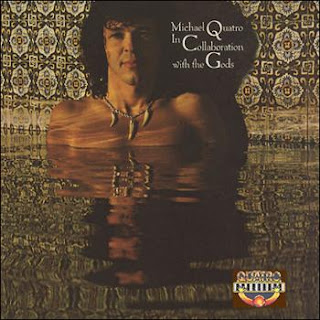 (I honestly love this album cover. Just check out that tile work)
Anyway, at the time I was in middle school at St. Clare Montefalco Mike's two step-daughters were also enrolled there. Mike convinced our estimable music teacher/guidance counselor, Dorothy Ciesluk, to gather the best voices in the school for his recording project.
About 30-40 of us were huddled on the stage in the church basement and prompted to sing a couple of different short lines. The one I remember is "Save the oceans and we'll save the earth." I wish I could remember what all of this was recorded on...DAT? Cassette? Reel-to-reel? In the mid-90's it really could've been anything.
Miss Ciesluk was so blatantly impressed with Quatro that it hurt even my pre-teen eyes to watch. Everything he said was either hilarious, brilliant or perfect...clearly she'd been notified that this guy had actually collaborated with GODS and had the album to prove it.
It wasn't until two years ago that I ever heard the fruits of my labor, entitled "The Ocean Song" 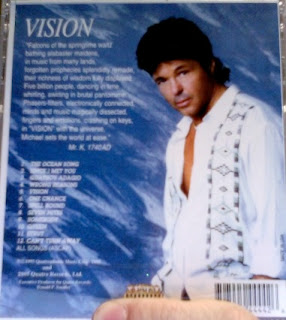 the back cover of the "Vision" album complete with quote that reads:
Falcons of the springtime waltz
bathing alabaster maidens,
in music from many lands,
forgotten prophecies splendidly remade,
their richness of wisdom fully displayed.
Five billion people, dancing in time,
whirling, swirling in brutal pantomime.
Phasers-filters, electronically connected,
minds and music magically dissected,
fingers and emotions, crashing on keys,
in "Vision" with the universe,
Michael sets the world at ease
Mr. K, 1740 AD
Here's the song for you to listen to:
The Ocean Song by cassdetroit
I've actually written on here before about my appreciation for "Songs of the Humpback Whale" so it was a welcome treat to hear those sounds as part of my first foray into the music biz.
Guitar heroics on the song were provided by Gary Spaniola who was also in Detroit mainstays Bitter Sweet Alley and did technical work on some Insane Clown Posse Records.
I'm not sure how well the "Vision" album did in stores, can anyone with access to SoundScan look this one up for me? Part of me is reminded of the lawsuit brought on by the English school children featured on Pink Floyd's "Another Brick in the Wall Part 2" recording, but I somehow doubt legal action on my behalf would be anywhere near as lucrative.
I bought my copy from Quatro's store at CafePress and urge you to do the same here Buy VISION now! You can also buy all kinds of custom-printed t-shirts, calendars and thongs right HERE emblazoned with images from throughout Quatro's career.
Enjoy!
Posted by cassdetroit at 10:58 AM 6 comments: