Record of the Week: Sonic Graffiti 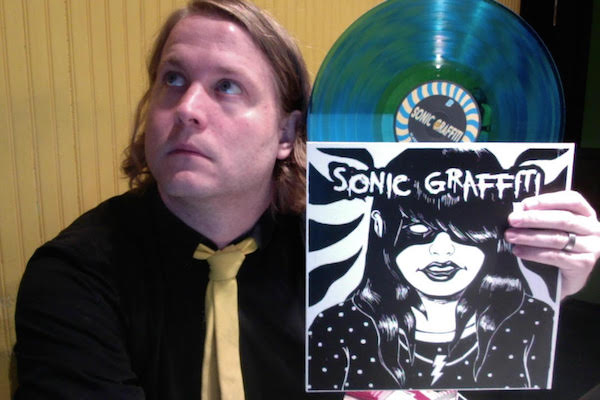 self-titled
REAL TIME RECORD REVIEW! I will only write about this record in the time it takes to listen to it.

I was hipped to this record by solidly reputable Keith Glass at the Nashville record show last Sunday. Dude’s Australian, lives in Mobile and is of a certain presence where you just LISTEN to what he has to say. He had Sonic Graffiti on his display wall for $20, colored vinyl, limited to 100 copies. I found a copy of Gabriel and the Angels “Chumba” in his 7” box and ultimately passed on it because I was pretty sure I already had it. Walked away, made the rounds.

“Mutiny on the Ant Hill” is more in the realm of solid Seventies psych six-minutes strangulation with verse-like punctuation of Sixties frat styling. Noodle-y guitar scribbles for an extended breakdown manage not to kill the vibe.

The record show was a unique trip as I’d brought my four-year-old daughter along. First time. I really, sincerely struggled with the idea of bringing her…what’s the purpose of a child at these things? Would she just run amok and flip boxes of priceless breakable 78s? Would she even understand what a record show is? She had NO business being there.

“Let’s Die Again” introduces acoustic guitar and a monotonous distant piano. A welcome change of pace at the perfect spot in the running order.

“I’m the Slut” is a memorable title to a forgettable song.

“I Wanna Love Love But Love Don’t Love Me” is a jam. Hendrix-styled held notes and wheedle-wheedle-wee guitar sounds. Warm tone on the guitar. Dig.

But then I realized, my parents took me to ALL KINDS OF THINGS I had no business attending. Shit, most summer Friday nights from the ages of 7 to 10 I spent running around my dad’s softball games, only to be dragged to the BAR afterwards. Begging for quarters for video games (if we were lucky) or more likely the jukebox. Kids in a dank midwest softball bar? Not ideal. Kids at a record show? Acceptable.

Side B begins with “Witch in My Heart” and some shapes thrown in the spirit of Jack White initially felt pastiche, but by the end of the song it felt like guitarist Drew had come into his own.

“Broken Window” is inoffensive and maybe that makes it ultimately offensive?

So Violet behaved herself. I was originally just going to have her walk around with me (like an idiot) but mom suggested I put her in the stroller and lock her down. Brilliant idea. At the earliest sign of impatience I just handed her my cell phone. I’m not proud of it, but such is the price you pay for the ability to dig. She randomly called some family, Swank, watched some YouTube and responded to text messages with stickers (which I’ve never used on my own) giving off the impression I’m more hip to technology than I legitimately am.

“Party Song For My Funeral” is the next song. Equally inoffensive?

“Ghost Steppin” feels changed in a welcome way. The world has not enough fuzz bass solos, so the one placed here is doing God’s work, tempered with melodic, downtempo interstitials. Me likes.

My wife gave me shit for the fact that Violet doesn’t have her own record player yet. I felt assured that she wasn’t ready, but Malissa kept pushing me. Said she needed a record collection too. Damn. Found a $1 copy of “Tequila” by the Champs, which was not only my favorite song when I was five years old, but Violet has also come to love from exposure via “Pee-Wee’s Big Adventure” and occasional one-on-one performances by Uncle Jack. Scooped it up and once I find the copy of “How Much is That Doggy in the Window?” I bought for her three years ago, we’ll have the beginnings of her very own stack of wax.

“Good Time in Misery” feels rote standard blue progression, but I can deal.

Penultimate song is “Nematode Grenade” begins with the lyrics “I was an alien but now I am a slave” and I have no idea what that means. I feel like the drums are buried a bit and that’s probably my only legit complaint about the mixing here, everything else is accurately and interestingly presented. I can also look past the fact that the guy is playing a Jack White Airline model, but I imagine some other folks may not be so forgiving.

After one guy stopped me as “didn’t you run the white stripes email list?” and another guy recognized me from Dust and Grooves, I spent a bit of time at the Goner Records table discussing the intricacies in pricing Elvis Sun 45’s (and bemoaning the fact I could not remember which two of those singles I did not have), we made our way back to Keith, who ultimately seemed surprised I was buying this LP. Said they’d played a few in-stores at his shop and they were, by far, the best band to do so. From Florida (they are forgiven) personal recommendations are still the preferred way to discover something to love.

“Shadow is My Only Friend” coasts along with atmospheric effects and is an apropos album closer. Ending on a fadeout? Ballsy move. I bet these guys are WAY better live and that’s no slight on the recordings, I just feel like a small, sweaty room probably conveys these tracks better than vinyl grooves ever could.  I am ultimately sincerely impressed with this Sonic Graffiti album. Curious as to why the cover I have is completely different from the one depicted on their Bandcamp, but will ultimately track down whatever other vinyl they have available. I suggest you do the same.

Posted by cassdetroit at 11:45 PM No comments: