Afterword for the Orbit Magazine Anthology...

I'm still flabbergasted that my writing actually made it into this book. Orbit was instrumental in shaping my outlook on the world and I feel privileged to play even a small part in this collection. To this day, an oversized decal of the timeless Orby head logo sits perched high in my office, hopefully instilling even the tiniest bit of inspiration on my daily work.

Don't just be a freeloader, buy one! 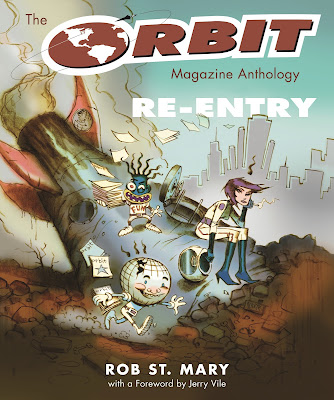 Nigh-on twenty years later, it's impossible to relay just how difficult it seemed to access and truly connect with media as a teenager in the mid-Nineties.  Without a car, one was left grasping in the dark at any tiny countercultural crumb that might accidentally end up in the daily newspapers or television.
One issue of Orbit Magazine would serve as an instant and invaluable cornucopia of wide-ranging peculiarities while never kowtowing to anyone or pulling any punches. Orbit always gave off the impression that they were doing exactly what the fuck they wanted to and that is decidedly difficult.
No sacred cows. No untouchables. Nothing off-limits. Everyone and everything is fair game for skewering. When your rules are the cliché "no rules" it truly gives a clean slate for something unique, fresh, important and artful to happen. While in other hands such free reign would quickly descend into mindless jibber-jabber, with Jerry Peterson and Orbit it evolved into a finely honed craft…never too childish yet never too serious. Orbit struck a wonderful balance between the absurd and the insightful without ever sacrificing a laugh.
Orbit operated as my own personal internet…a concentrated hub of all that seemed interesting and odd and funny and subversive and informative…a full decade before the Internet truly became what it is today. It explicitly informed me of what was cool and what was lame. To accomplish what Orbit did in the terribly reactionary format of a monthly tabloid-size newsprint? That is no easy feat. To be free on top of that? How did this thing ever exist for even one issue, let alone nine years?
I got my copies mainly from Hong Kong Chop Suey, the carry-out Chinese restaurant from a forgotten era a mere 15-second sprint from the house I grew-up in. If the usually spot-on first of the month delivery was late, I'd get testy. If delivery was while the restaurant was closed (and thus just a pile of zip-tied pile copies sitting in front of their door) I'd cut the tie myself and slip out a copy, clearly unable to wait.
Every new issue was a gateway into a world of excitement. One never knew what to expect and I can't say I was ever disappointed. It was the embodiment of cool culture wrapped with eye-catching graphics and whip-smart design.
In all my years I will never encounter a more-memorable specimen of journalism than the final issue of Orbit. While most folks' nature is to make goodbye an amiable, saccharine affair there was no such intention from Jerry and Orbit. What'd he use his bully-pulpit to accomplish? To call out every deadbeat advertiser they'd ever dealt with and rip on them mercilessly while doing so. If that's not enough, the claim that they'd set an unstated number of ads for that final issue and that if they'd reached it, the magazine would remain in print. The kicker was that they missed their supposed goal by one ad. Who do they lay the blame on? YOU! The lazy sod who didn't place an ad. Your favorite publication could've been saved. Too bad. You lose. We all lose.
As bummed as I was when they closed up shop, I'm glad it did. I don't think Orbit would've been able to compete or be as fresh as it was much longer. They went out on their own terms.
Reading this back to my wife, Malissa, a fellow Orbit devotee, her initial comment is "That's all great…but it sounds like adult Ben talking." True, I am now nearly twice the age I was when Orby ceased publication. Something that'd likely come from 15-year-old me…
Holy shit! This book is hilarious! And it has facts!

I’m lucky, you’re lucky, we’re all lucky to have all these morsels here in one place for our reminiscence and enjoyment. Back in the 90’s, I was ecstatic with one issue a month.
Posted by cassdetroit at 3:03 PM 1 comment: