400 Pounds of Punk: The Lost "He Once Ate a Small Child" Cassette 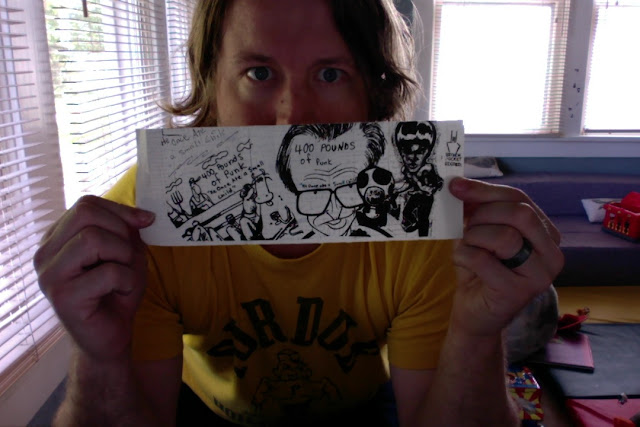 He Once Ate a Small Child

scum stats: if there are more than twenty of these out there, I'd be shocked. I'd bet less than half that

As a primer for this post, it helps to have already read this piece...

Ok, ok, ok...Cassette Store Day has come and gone and to help celebrate the meaningless event, I'll talk about an actual real live cassette here that is virtually unknown.

I went to school with Scott Riker, the guitar player in 400 Pounds of Punk. I'd heard in the halls there was someone else who liked Nirvana to an unhealthy degree. We chatted a bit, probably traded some bootlegs (back then I had the Into the Black 6 x CD boxset which made me particularly cool to a specific subset of dorks...I actually still have it, so you know, if you're a dork).

Scott played guitar and told me he had a band called 400 Pounds of Punk. At that same time, my buddy Nick and I had a band we were calling the Rags. Sophomore year. 1997-1998.

In a totally unrelated world, my uncle Jack was starting his band the White Stripes. One of their first shows was opening for the band Rocket 455. Jeff Meier, one of the guitarists in Rocket, struck up a friendship with Jack. I remember, clearly, being at Jack's house in Southwest Detroit while Jeff was there hanging out. Jack said, "Hey Jeff, what's the name of your nephew's band we're recording tomorrow?" to which Jeff replied "400 Pounds of Punk."

I was gobsmacked. Of all the suburban teenage bands out there, how in the HELL were these guys, to which I had mentally self-invented a rivalry, recording with MY uncle?

It took me all of five seconds to simmer down. I probably used the perceived slight to practice more. Whatever.

Jeff's nephew, Mike Audia, was the drummer in 400 Pounds of Punk. Jamie Cherry was the singer, but I'm not sure if he was anyone's nephew.

The session seemed to go smooth from what I gathered. Jack and Jeff probably worked together with the engineering duties. While only five songs were on the released cassette, the full session contained a few more, including covers of Nirvana's "Drain You" and "Endless, Nameless."

Me and Nick, as the Rags, would go to Jack's house a few months later and record our two Nirvana covers, "Frances Farmer Will Have Her Revenge on Seattle" and, duh, "Drain You."
(seriously, if you don't like "Drain You", you're not a REAL Nirvana fan)

The master reel for 400 Pounds of Punk is dated 1-3-98, and even though I would've thought the session took place as much as a month or two earlier, I do need to resign myself to the fact that there can very easily be gaps in my memory.

My biggest take away from all of this is...thank god for cool uncles guiding aimless punk nephews. Should I ever have a nephew, I will happily repay my debt to society. Second takeaway...man, I was as pretty shitty drummer. Probably still am. Mike is SOOOO good on the tape, blast beats and fills for days. Literally did not feel like a teenager should be able to play so good. Third takeaway...why didn't I ask Jack to sing with us??!?!?! Duh. Big regret over here.

Jeff plays the sick guitar solo/lead on the cover of "One Way Or Another" and I'm pretty sure this is the only recording ever with both Jack and Jeff performing together. A nice capture of a brief moment in time that was seemingly forgotten/ignored for far too long.

400 Pounds of Punk later changed their name to the Surgeon Generals and actually released a CD on a label either called Jeff Row or Jeth Row or some weird play on that phrase. Like this cassette, there is NO info to be found about that CD anywhere, but I know there's a copy of it in my basement somewhere. Nick and I played the same bill as them, the only time Nick and I ever took the stage together, for Notre Dame High School battle of the bands. Spring of '99. We lost, so did Surgeon Generals, this pretty boy named Ian had a band that did all Creed covers and cleaned up.

Nick and I were joined by Larry on bass and we did covers like Nirvana "Sliver" and "Dive" and then other things like "Louie Louie." I remember not feeling great about the performance. I wanted us to look sharp, so I brought a bunch of suit coats and ties for us to try class up the joint. In one of the most beautiful memories of my life, Larry's back is facing me, fiddling with a tie, turns around and says "How's this look?"

He was wearing a navy blue corduroy jacket, a tie, and no shirt. It was beautiful. This is what passed for rebellion in an all-boys Catholic high school. Never mind that Nick, our vocalist, started the show with a call to the crowd to come closer to the stage, "Come one, come all...gay and straight alike." I thought we were gonna get pulled off-stage before even playing note one. I think my bass drum kept sliding away, songs didn't go off as planned, I was frustrated. I had them introduce us as The Mindbenders for some reason. Ugh. Sixteen is a bitch.

I'm sure there's more to be told, but the girls are swinging from the rafters. It's amazing I was able to write this at all. 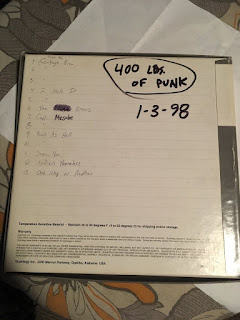 Posted by cassdetroit at 11:07 PM No comments: