There's no big lead-up. Just check out these singles with utmost speed.

Also, there's some Blackwell-penned reviews in the new (Mc5 on the cover) issue of Ugly Things. Visiting here means you may actually really like what I write and/or trust my opinion, so check out my reviews of Leadbelly, Panciera's 45 Revolutions book, the Patron Saints, the Home Schooled comp on Numero Group, the deceptively awesome Holding a Dream comp on Boss-A-Tone and Nathaniel Mayer's Love and Affection comp on Vampi Soul. I'm honestly proud of those reviews and they're were sincerely slaved over to reach an impossible deadline so the least you can do is grab a copy at Borders and leaf through it for 5 minutes. Come on...you owe me.


1. Wolf People "October Fires" Battered Ornaments
What I look for in the best single of the year is something that totally catches me off-guard. I already knew how awesome Brian Olive, Tyvek and Jay Reatard were at the beginning of '07, but to basically stumble upon the Wolf People 7" at Rockit Scientist and paying an absurd $12 for the import single was pure luck for me. I bought it blindly and was wildly rewarded. As I said in MT, it wonderfully combines the best of everything that was happening in England in the late 60's. And the striking, beautiful artwork and attention to detail easily makes Battered Ornaments a label that I will buy every new release sight-unseen. My highest stamp of approval.

2. Brian Olive "See Me Mariona" Fitzrovian Phonographic
Like you didn't know? Olive's got to be sitting on mounds of stuff as stellar as this medium-psych scorch.

3. Tyvek "Summer Burns 2x7" What's Your Rupture?
I typically frown upon the double seven-inch format, but only savants such as Tyvek can transform that into a shit-eating grin. The new kings of Detroit and they don't even know it.

4. Jay Reatard "I Know a Place" Goner Records
It's as if after years of whatever you choose to call the Reatards/Lost Sound endeavours, Jay has fallend ass-backwards into hit-after-poptacular hit in his solo incarnation. See also his "Hammer, I Miss You" and P-Trash 7" as proof that every single he does, no matter how miniscule the pressing or obscure the label, is a fucking gem.

5. The Tall Birds "Action" Shake Appeal
Simply put, a refreshing rock band. Can't say they're doing anything new, and yet, can't say there's any band that would prove an apt comparison for the Tall Birds.

7. The Duchess & the Duke "Reservoir Park" Boom Boom Castle
Seldom if never does the acoustic guitar/vocal combination move me. The D&D do it right and it's as if for the duration of this one single that the sun is shining solely for me.

8. Ultimate Ovation "It's the Weekend" Eleganza
Long-forgotten Detroit vocal group backed by some of Detroit's best rockers turn out a slice of 70's funk that exceeds the highest of expectations.

9. Frustrations "Exploding Mind" Die Stasi
Seriously, when Dunkerly slops it out on that half-time breakdown, it's like the shit in my intestine momentarily turns into pure opiates and I'm rendered wowed.

10. Whirlwind Heat with Lightspeed Champion Lightspeed Heat Brille
I'm fully indoctrinated in the Heat's brain-cult and "How Do You Do?" is unparalleled, woozy git-pop par excellance.
Posted by cassdetroit at 11:30 PM 1 comment:

The Walkmen's "In the New Year" and How Its Seven-Note Melody Has Been Stuck in My Head For Days...

Days later and I'm still thinking about the Walkmen show. The flux of new material they played was overwhelming. It's ballsy to play as many unfamiliar songs as they did on Thursday night. The first song, "In the New Year" was breathtakingly brilliant. I seem to remember lyrics along the lines of "Last year Christmas was black and blue, this year's Christmas is white." Such a strong lyric and in the context of only hearing it once I can't help but conjure meaning behind the words that's comparisons between Stones and Beatles albums. Singer Hamilton Leithauser's lyrics are more-often-than-not disarmingly simple. A song like "Thinking of a Dream I Had", when viewed on paper, is nothing, as shown below:

I'm waiting on a subway line
I'm waiting for a train to arrive
I'm thinking of a dream I had
Maybe your right
Hammy pumps those words so full of feeling, of emotion…full of raw, unadulterated UMPH that the song jumps with vigor. Nevermind that the lyrics of the song never address the dream that he's thinking of. No. He's simply thinking of the dream. None more need be divulged. I fucking love it. 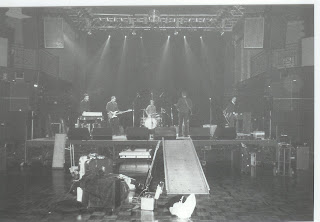 (photo by the author, soundcheck at 9:30 Club, DC 2004)
But this song, "In the New Year" is already unforgettable. I've heard the thing only once, but randomly and without provocation, the chorus melody struck me again today. Just popped into my head when I thought I'd forgot it.

It's a simple string of six ascending notes with a decrescendo for a final seventh note, with accents placed on the second through sixth notes. The first and last notes are both held twice as long as the others. I understand this description may be getting a little over-the-top, but with nothing else to refer to, I'm kinda hostage to my memory.

There's an undeniable cohesion that the Walkmen lock on all the time. Particularly Paul Maroon's guitar coupled with the Farfisa Fast Three organ. It becomes bigger than the moment, the sound fills the space and takes on a presence that's greater than the sum of its parts.

Maroon's guitar is overly reverbed, to the point of sounding behind the beat…as if it's constantly fading in late. The effect is soothing and seems to slow everything around it. Joined with the thin, whirring Farfisa, the pairing wraps atmospheric swaths of orchestral magnitude throughout the room.

In some respect, I would like to hear Maroon's guitar by itself, unaccompanied by any other instrumentation. He's underappreciated almost to a fault, but the scenery he's able to conjure with his Gretsch and Twin Reverb moves me to moments unparalleled in music appreciation.

And "In the New Year" is another one of these brilliant Farfisa/Gretsch moments. Who knows when I'll hear this song again and hope someone out there can find a live bootleg for me The band has 9 of these new songs recorded and are hoping to get a total of 16 down, but right now, it takes all I can give to NOT think about it. This song and its melody remind me of buried-in-the-subconscious church hymns with its instantly familiar feel. The Germans should have a word for it. Nevertheless, with one listen the song feels a part of me and that is the highest compliment I can pay an artist.

The ended with another new song, not equally as memorable but still striking, called "On the Water." I love this band and want everyone else to too. There's no witty, clever or smart ending here. The Walkmen are under-the-radar and in some ways it's nice…to have this unparalleled band be like a best-kept secret. But you wouldn't find me complaining if everyone understood the greatness they behold.
Posted by cassdetroit at 10:45 PM 8 comments:

Getting some love over at Arthur magazine's blog:
http://www.arthurmag.com/magpie/?p=2529
And my perfunctory year-end albums list for the Metro Times:
http://www.metrotimes.com/editorial/story.asp?id=12246
To (maybe?) be featured on Chunklet.com
List of Things I Didn't or Couldn't Include on My Lists For the Metro Times or Arthur:
1. The White Stripes Icky Thump
2. The Go Howl On the Haunted Beat You Ride
3. Blanche Little Amber Bottles
4. The Muldoons s/t
5. The Art of the Band T-Shirt book
6. Trees Community The Christ Tree 4xCD reissue
7. Amy Winehouse Back to Black
8. Bo Diddley I'm a Man 2xCD reissue
9. Ghetto Brothers Power/Fuerza reissue
10. Michael Yonkers Carbohydrates Hydrocarbons
My actual, honest-to-god top ten albums of 2007 regardless of my involvement or blood-relation:
1. The White Stripes Icky Thump
2. The Black Lips Good Bad Not Evil
3. Liars s/t
4. The Horrors Strange House
5. The Go Howl on the Haunted Beat You Ride
6. Tyvek Fast Metabolism
7. The Muldoons s/t
8. Amy Winehouse Back to Black
9. Magik Markers Boss
10. Blanche Little Amber Bottles
Top 7" singles of 2007 soon to follow.
And y'all?
Posted by cassdetroit at 4:13 PM 10 comments: