A Sprawling Trawl Through Oddities of Detroit Vinyl...

I like the weird records in Detroit history. They are by no means the greatest…but we all know that Motown and techno and the MC5 and Stooges have all been chronicled to the absolute bottom of the barrel and it overshadows a lot of the one-off, unique and downright odd records produced by this fair city.

Records like "P.A.L. Bump" by Les Cochons Bleus. While they were later known as the Blue Pigs, this group of five active-duty Detroit Police officers were a band that would play schools, recreation centers, civic events and other various gatherings where passable live music was desired.  This record was released by the Police Athletic League (PAL) where in 1993 I was the only white kid on an all-black baseball team. (team photo available) The song itself motors on in a vaguely funky way until an otherworldly synthesizer solo blows the whole thing up into oblivion.

My dad told me he was friends with one of the original members, one who eventually got kicked off the force for doing off-duty security at an after-hours bar. This may or may not be discerned with the two different picture sleeves this record was issued with, depicting different guitar players on the cover. (side note: the Blue Pigs played at my grade school at least twice while I was a student. I remember two cover songs they did: "I Wanna Be Rich" by Calloway and "The Best for Last" by Vanessa Williams. Also, the drummer used a tiny electronic drum pad for all his parts…not a cymbal or drum in his arsenal at all. Such was the early Nineties.) 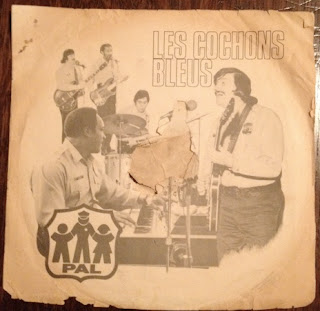 (a more-desperate need for an upgraded picture sleeve I cannot think of...hook a honkey up if you're holding) 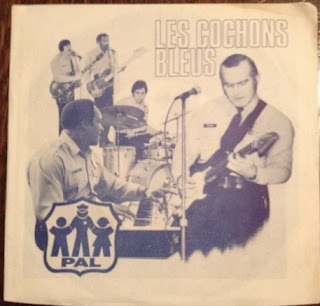 (notice how the mullet-ish qualities of the guitarist in the upper left-hand corner have been edited)
(both of these sleeves open on the BOTTOM. fucking dumb)


Or "Rock 'n' Roll Screamer" by Adrenaline. These guys were East Side and went to Catholic grade school...two things that could also be said of myself, and thus I feel an affinity for them. In a later incarnation they were better known as DC Drive, but this first single by Adrenaline is unlike anything else they'd ever put to tape. "Screamer" smokes in a weird way that only a non-punk rock record from 1977 can. All chugga-chugga motoring riffs with powerful vocals that border on melodic, this is a rare breed of 70's-80's Detroit rock that is almost completely overlooked outside of a handful of hardcore, borderline psychotic collectors. The original pressing seems to have been self-released on the Green Grass label, but existence of that has yet to have been proven...at least to me. It was definitely released by Fiddlers, a label headquartered out of a music instrument store that was half-a-mile from the house I grew up in and where I bought my first ever drumsticks, kick pedal and guitar. Fiddlers also and put out ignored records by the likes of Holy Smoke, Jett Black, the Happy Dragon Band and others.

"Methane Sea" was self-released by Richard Davis in 1978. Davis would later gain renown as the other half of Juan Atkins Cybotron outfit, under the moniker 3070. As the self-released showcase for a 'nam vet electronics enthusiast, this single packs loads of programmed electronics and vast swaths of synthesizer wash coupled with Davis' spacey vocals. The tracks are "Prelude" and "Aftermath" and they are genuinely bizarre. All the lit on techno history makes mention of Davis and this single, but damned if you can find it or even clips of it anywhere. I immediately jumped on the only copy I've ever seen and it was the most confusing/satisfying $300 I've spent on a record. 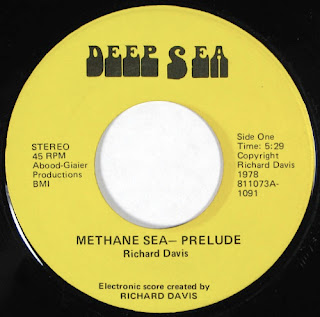 A recent perplexing find has been a self-released LP by Richard Ristagno. While I'd originally become aware of the guy based on a single he did under the name Canada (which I'll talk about some other time), his LP from 1980 is unwaveringly odd. He pressed 200 copies, never made any cover art and his backing band was a group called Soular. Ristagno hired Soular, a band usually at home doing covers of the Marvelettes or Temptations, out of the classified ads. What results is a pre-new wave, low-fi, fuzz guitar therapy session where the loner gets the cheese. With lyrics like "Give it to me front-door style" you know you can't go wrong. A buddy and I managed to scrounge up some copies from Ristagno himself and before that, there was absolutely NO evidence anywhere of this record ever existing. A reissue by respectable independent label is currently in the works. 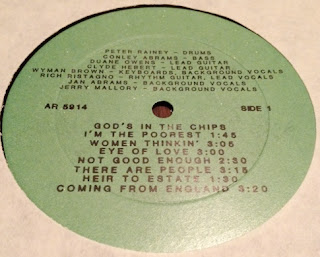 (special bonus...getting an original Archer Records emblazoned cardboard box out of the deal)


Of particular interest is the LP of Tape Fed Into Garbage Disposal by Spaceman and Jake by Sweet Kelly. First off, that may be the best album title of all-time. Released in 1997 on the Zedikiah label (run by the quasi-legendary biker-folk madman Nicodemus) it remains unclear how a trio of suburban youth crossed paths with a motorcycle gang leader with a face tattoo. The record was "re-discovered" a couple of years back by Aaron Dilloway (formerly of Wolf Eyes) who went as far as buying up the remaining stock Nicodemus had of the LP and began hawking 'em at the WE merch table while on tour. While looking for a copy I managed to snag one sold by Steve Turner (of Mudhoney/Super-Electro Records) that had a complete press kit included. According to the band, their influences are Pink Floyd, Black Sabbath and Monster Magnet. The list of clubs they'd played is also fairly impressive…solid East Side haunts like Java House, I-Rock, and the Palladium, not to mention a surprising appearance at the Gold Dollar. 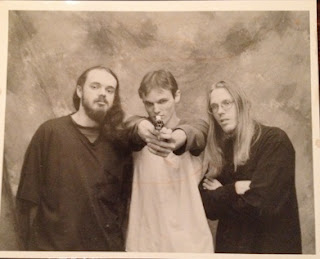 (quite possibly the first time a picture of the band has ever shown up online. does anyone care?)

The record itself is reckless teenaged confusion that sounds like it was mastered directly from a fried cassette. I'm still fairly confident I don't "get" where this record is coming from or what it's trying to accomplish (Floyd, Sabbath and Magnet all feel like red herrings). But the manner in which it stands alone, seemingly devoid of context, contemporaries or discernible influence, is what keeps me coming back. I would not be surprised if I was told "Tape Fed…" was actually recorded ten or twenty years earlier. Interpret that as you may, but it's truly a more difficult feat than it seems.


"Love Eyes (Cast Your Spell on Me)" by Lenny Drake is wonderfully out of place. Drake had success (I guess) with his group Lenny and the Thundertones performing instrumental surf tunes. Yet in 1970 on what seems to be his own "Rated X (for Excellence)" record label, Drake unleashed a searing guitar workout that seems out of place in just about any era…especially when the home organ-esque drum machine rat-a-tats without variation as the only rhythm throughout the entire song. With Drake's slaughtering guitar work, it's safe to say that any more accompaniment would only detract from the rest of the brilliance. 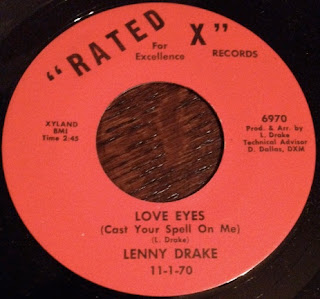 Posted by cassdetroit at 9:50 PM 5 comments: