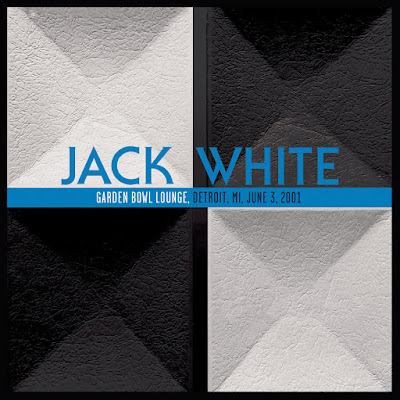 The weekend had been a whirlwind...the slightly odd outdoor college gig on the Columbus campus of Ohio State at dusk on Friday night followed by the third time in nine months that the Stripes were onstage at the Southgate House in Newport, Kentucky on Saturday evening...pretty sure it was the first run of gigs in the brand new 2001 model Dodge van that Jack and Meg had bought from the dealership for straight cash. I sold merch out the back of the van in Columbus, Weezer's "Green Album" was listened to on the drive, the band goofed on the Gories' "Rat's Nest" on Friday night...these are the few memories that are still retrievable two decades on.

We made our way back to Detroit with a tad bit of urgency, as there was an interview with Ralph Valdez on WDET radio on Sunday night followed by this performance at the Garden Bowl Lounge, booked under the name “John Gillis” with hopes of notifying some people while not tipping off ALL people.

In my memory Brendan Benson was doing sound or at least some approximation of it. There may have even been a newly purchased PA for the occasion, but still, that room is a hard one to get the sound just right. Compared to previous Jack White performances in this spot, it felt a hair more subdued...no other musicians, no feral screaming, still that same electric hum, but more a calming exercise than some attempt to prove something or win folks over.

Jack first played the Garden Bowl Lounge, solo, in November 1998 and in the intervening three years he would play there no less than five additional times in various configurations. The June 3rd, 2001 show is, seemingly, the last time he’d play this intimate setting where he’d spent so much time, both socially and on stage, that time and the experience gained used to propel himself from local up-and-coming musician to internationally renowned ROCK STAR.

That being said, I am hard-pressed to find or recall ANY set by Jack White, in any incarnation or band, that is as varied and unique as this Garden Bowl gem. A layover, stopoff, way station...in my eyes, something that just had to be done as a means to get to the better things in the not-so-distant future. The metaphorical closing of one door so that fifty more could open.

All these years later, I’m legitimately surprised to find out that this evening is likely the first-ever live performance of “I’m Finding It Harder To Be A Gentleman.” The take here is charmed...almost as if Jack had never even tried to tackle it without the beating heart electric piano that pumps throughout the recorded version...having to find his footing on the fly but never tipping his hand to the struggle.

Coupled with an early live outing of “We’re Going To Be Friends” and solid runs through tried-and-true (at least in Detroit) songs “Hotel Yorba” and “The Same Boy You’ve Always Known” along with “You’ve Got Her In Your Pocket” a good two years before the band would record it and those are the only de facto White Stripes songs shared this evening. The majority of the set is a phalanx of covers which almost reads as a road map as to where the future would lead.

Like “Rated X”...the Loretta Lynn-penned polemic here is plain but pointed, the live from the Hotel Yorba version would be recorded within a week and end up as a b-side from the Stripes come November.

Or “Cold Brains”...on this evening all contemplative and compelling, while just over a year later and an hour up the road Jack would perform it live with its writer Beck at the Michigan Theater in Ann Arbor.

Or “Baby Blue”...the 1958 Gene Vincent rockabilly gem, which soon after this performance found its way into Stripes sets and in seven weeks time would wrap up, on a lark, their first ever session for John Peel, as earlier that evening Peel had mentioned his appreciation for Vincent in passing.

“Who’s To Say…”  had been a staple of Two Star Tabernacle’s sets during their brief 1997-1999 existence. The song was written by White’s Two Star band mate Dan Miller and would see its debut release via Miller’s group Blanche on a 7-inch on my imprint Cass Records. Released “summer 2003” (I’m terrible with non-Stripes timelines) and complete with a stellar guest guitar solo from White, the Stripes’ version would follow close behind as the flipside to their “I Just Don’t Know What To Do With Myself” single in September 2003.

“Fragile Girl” was originally written by Dean Fertita and performed in his group the Waxwings, who joined the White Stripes on their West Coast tour in July 2001. Fertita would later perform with White in the Raconteurs and then as bandmates in the Dead Weather. White’s pre-song anecdote speaks to his endearing mishearing of the lyric “to unveil a vision” as “television” and its ability to break up a couple or bring them closer together. 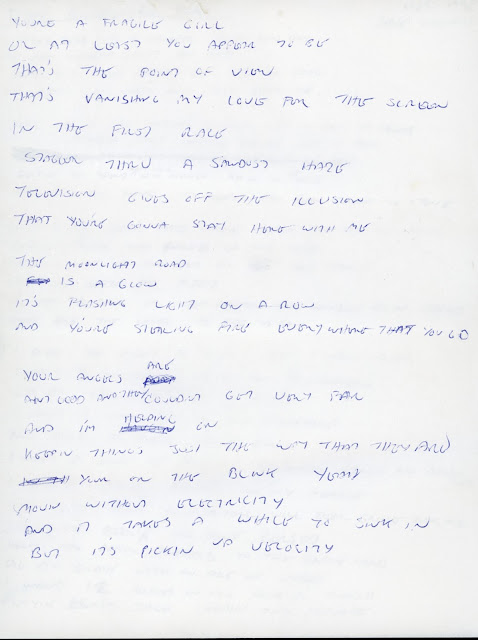 The middle of the set is thick with blues and folk covers. White’s tackling of “Dying Crapshooter’s Blues” is arguably the highlight of the entire performance. The daft deathbed storytelling is accompanied by insistently accelerating guitar...from slow, to trot, to rollicking...as the listed litany of last requests piles up, the specter of impending death is palpable, as if there’s a rush to get all these thoughts out before Death wields its mighty scythe. 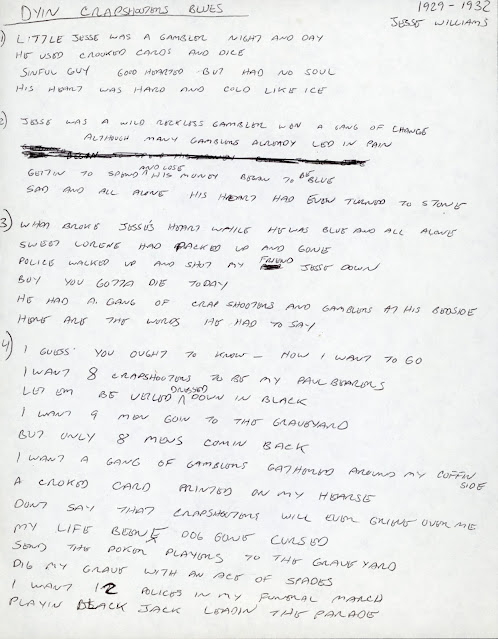 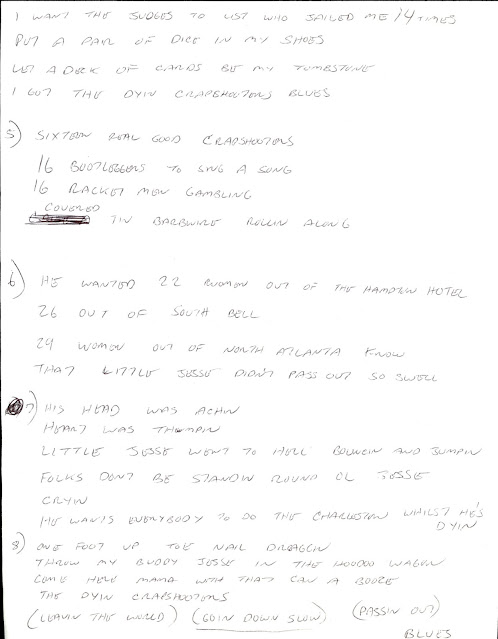 The folk standard “Black Jack Davey” tells its tale with an austerity of words, which would later make an appearance as the b-side to “Seven Nation Army” in roughly two years time.

“In My Time Of Dying” likely shows up on White’s radar via Zeppelin’s 1975 version. In the context of his performance here, both Blind Willie Johnson’s 1927 original (titled “Jesus Make Up My Dying Bed) and Dylan’s well-known take from 1962 seem to figure prominently.

White’s version barely hits the ninety second mark when, right before the start of the third verse, he pivots into Blind Willie McTell’s “Lord, Send Me An Angel.” Curiously, the first word of that third verse is “Lord” and I can’t help but think this was a purposeful connection between the two done on Jack’s part.

For me, being in the crowd for this performance was a treat...these were all songs that kinda felt like they’d just been floating in the ether for the past couple years. Things that’d be goofed on, messed with, maybe never fully explored yet. In the spirit of that, at approximately 3:14 mark of “The Same Boy You’ve Always Known” you can hear my distant voice yell “Hypnotize!” from the bar.

Jack had written the song roughly three years earlier as a “gift” to local band the Hentchmen. He’d come up with the idea that was vaguely in their musical wheelhouse, recorded a demo where he played all the instruments, and then shared it with them to ultimately...end up having the White Stripes do a version for “Elephant.”

Having heard that demo at the time and likely nothing of itin the intervening three years...I was just hoping to hear it again. My request went unanswered and I’d end up waiting another eight months or so before the Stripes started playing it live.

A recording of this show made by taper Brian Rozman seemed to be available in trading circles pretty quickly after the performance. The quality is solid. A few years back when gathering disparate master tapes for our vault, a DAT of this show recorded by Brendan Benson landed on my lap. Having been previously in the dark about its existence, I was happy to hear it was even better quality than the respectable audience tape...yet failed to capture the entirety of the performance.

So with the help of our crack mastering engineer Bill Skibbe, we stitched those two recordings together and gave the whole thing a proper mastering clean up for the audio you listen to today.

The Garden Bowl Lounge looks largely unchanged now from how it was back in 2001. There’s a new coat of paint on the walls, the random black and blue linoleum flooring has been replaced. But if you get in the cozy little nook where Jack was set-up on that calm Sunday night in 2001 and look up, you’ll see the same checker pattern black and white ceiling tiles, having held that spot for Lord knows how long.