Who's on First? An Internal Conversation on Baseball and Beck

I wrote this in 2005 for Creem Magazine online. Since that website is currently one step above a phishing scam, I thought the piece deserved a permanent home here.

Beck is as close as I will designate to a “cultural institution” in my lifetime.  From the quintessential quality of “Loser” to the seminal sissynecking of Odelay the man has never misfired. With all of his genius, I never thought Beck could take a backseat to anybody.  That was until I went upstairs at the State Theater.
Right before Beck took the stage last night my lovely girlfriend Malissa asked if we could sit down for Beck’s set.  I ache at the slightest spell of standing up, so I was happy to oblige.  As we scouted seats and finally sat down on the mezzanine level, section D, I was dumbstruck at whom we were sitting behind.
In front of us, in all his bald-headed glory was Kirk Gibson.
Now some of you may not know this name, but to those of you who are not faithful Detroiters or above-average baseball fans, Kirk Gibson was a quintessential member of the Detroit Tigers in the 1980’s. This may seem as no big deal, but as a young chap baseball was my passion, only to be replaced with music around the age of twelve.
I spent 90% of my childhood summers playing baseball and the rest stuck on I-94 in between games of baseball.  I read box scores, kept my own personal statistics and bought packs of baseball cards like it was all that was keeping me alive. For all I know, it was.
You see, my dad was a baseball coach…still is in fact.  Morris Blackwell is a fixture on Detroit baseball diamonds for the past five decades.  He used to work at Tiger Stadium when he was in college.  He claims he was the one who wheeled 3007 silver dollars onto the field as the club awarded Al Kaline one for each hit of his career.
My father’s labor stint at the stadium meant he would never resort to buying tickets for a game at the Corner.  Instead, we’d go to the crew entrance and wait for someone he knew to walk by and get them to sneak us in.  This enraged my mother to no end, but she never came to games with us anyways.
But back to the point, my father’s love of the game was faithfully instilled in me at a young age, a love that I was proud to live and carry on every time I recited the infield fly-rule.  I, sometimes to my chagrin, played on his teams and he, much to the test of his temper, coached me.  It is by far the most precious time a father and son can spend together.
Little things about baseball just take me back…the gravel dust smell of your bat bag, a cheekful of watermelon-flavored Big League Chew, the fresh cut grass on the fields you played (Clark Park’s small diamond, almost exclusively) to the hassle of stirrups that never stayed up over your calves.  Looking back at these memories, Kirk Gibson seems to magically appear as if he was always there.
So as I sat there, awaiting the Guero himself to take the stage, I couldn’t help but be distracted.  For chrissakes it was Kirk Gibson in front of me! The rest of the show would find me racking my brain and realizing that Gibby and Beck shared a lot of similarities in relation to my life.
-Kirk Gibson was the first famous person I ever met.  On December 23, 1988, my brother and I walked the two blocks from our home to Jim Saros Realtors where Gibby, Dave Rozema, Dan Petry and Dave Bergman were signing autographs and posing for photos.  We were given a Polaroid of the meeting.  It stood on my bedroom dresser for a few years. 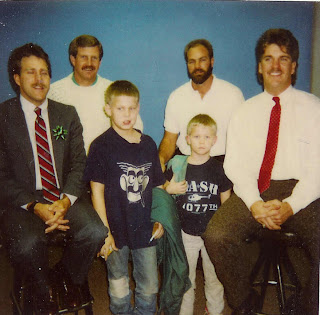 (yeah, my brother was into Groucho Marx when he was 9 years old and I was down with vintage MASH t-shirts before vintage was even cool)

-I met Beck in Ann Arbor in 2002 after he played an emotionally stirring acoustic show. He didn’t have much to say, (I guess Gibby didn’t either).  There are no photos of us together. I would meet Beck a few more times in later years and even go to a party at his house, where his wife served delicious snickerdoodles.
-Beck wrote “Loser” a song that supposedly defines my generation.  After you hear a claim like that enough, people begin to believe it whether or not it is anywhere near the truth. I say screw that… I think that Odelay is the most important album of the Nineties, a free-spirited and ambitious response to his being tagged a “slacker” that produced arguably the best music videos and best album artwork of the decade. The fact that he turned down a six-figure offer from Pepsi to license “Where It’s At” only makes it all the sweeter.  The fact that “Where It’s At” the first single off the album and arguably the best song on the disc is track 6 makes it that much cooler. Odelay has better (and more legal) sampling than Paul’s Boutique and explores far more musical genres successfully than anything else in recent memory. And I think Beck himself knows this, as his latest album Guero is, in regards to Beck albums, essentially Odelay 2.
-Gibby hit two home runs to clinch the title for the Tigers in Game 5 of the 1984 World Series. He was immortalized on the front page of the Detroit Free Press with his fists in the air with the headline “Gr-r-reat!”
This broadsheet would later be canonized in the form of a glossy poster.  Somehow a stack of 50 ended up at my house (my dad could work miracles).  It would be on my bedroom wall for quite some time. The moment itself would be considered one of the only bright spots for Detroit in the 1980s (next to crack cocaine, the emergence of Japanese automobiles and Devil’s Night) and even though I was too young to remember 1984, I definitely longed for its days, even if it was only for a winning baseball team. Within Detroit, 1984 was viewed as a pinnacle, a time within recent memory (not necessarily mine) where things seemed to be alright.
(Bubba Helms and what's possibly the first national championship riot in US history)
And this is still evident today in Detroit.  You’re not a true hipster in town if you don’t have a vintage ’84 Tigers t-shirt.  I found a suitcase full of ‘em at a flea market three years ago. Never worn.  Three bucks a piece.  It was heaven.  I began handing them out to friends “Can’t be in the scene without a Tigers t-shirt, they may think you’re from Toledo.”  It’s one of the few vintage t-shirts that seems to transcend irony, where people can agree “Yeah, the ’84 Tigers…they were badass!”  And there’s never been a better professional baseball logo then the old Tiger with those hypnotizing eyes.  That shit is scary. 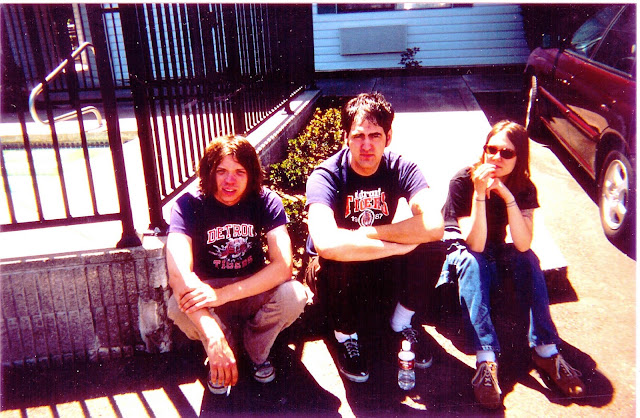 (Kevin Peyok, Greg Siemasz both wearing vintage Tiger's t-shirts White Stripes/Von Bondies/Waxwings tour July 2001)
The way this city pined for 1984 was truly hilarious.  My brother’s kindergarten class composite photo included a board that read “Stay Alive in ’85.”  The next season hadn’t even started and all we were asking was for the team to merely not die.

(I cherish this photo beyond words)
-Kirk Gibson was never a fan favorite on the Tigers.  That spot was always reserved for Alan Trammell. Gibby refused to sing autographs and was often rude to the media. But you couldn’t deny the guy on the field, he consistently delivered.  Gibby was Fonzie while Tram was Richie Cunningham. No more proof is needed when you see Tram was picked to manage the Tigers while Gibby barely made it as a hitting coach.
-No matter how long he’s around, Beck will always be slightly overshadowed (in my mind at least) by Kurt Cobain.  Kurt had the biggest influence on the 1990’s, even if he was dead for more than half the decade.  Nevertheless, Beck could kill a hooker and hijack a plane to Cuba and he’ll still always be seen as not as badass as Kurt Cobain.
-My best friend in grade school, Rob Topolewski, is by far the biggest Kirk Gibson fan in the world.  He had numerous items in his bedroom autographed by Gibby (always the same too, “To Rob, my best, Kirk Gibson”). At the same Jim Saros signing my brother and I attended, Rob showed up too. But he showed up with a Los Angeles Dodgers jersey.
You see, this is considered “quirky” for a first grader because in one of the tragedies of free agency Gibby went to the Dodgers in 1988.  Rob, being a loyal fan, simply showed his support for Kirk by getting the jersey for Gibby’s new team.  I understood it wholeheartedly (especially as a 6-year-old) and probably would have done the same thing if I were his biggest fan.  But adults don’t seem to get that…Rob’s picture with Gibby made it into the Detroit Free Press the next day.

(Robby's birthday is the day after mine. He would later be nicknamed Bobear. He's the only person from kindergarten I'm even vaguely in-touch with)