As much as I've spent my life loving history and collecting records...I find so very little documentation of the history OF collecting records. But last week the wonderful Dante Carfanga came through with a previously unknown-to-me monster of paper ephemera. From an estate he was involved in clearing out, he found the original photocopied auction sheet for an absolutely insane set sale / auction of Michigan garage 45's from 1987.
First off, this list is just an incredible guide as a starting point for Michigan garage collecting. I remember riding in the Hentchmen's van back from a gig in Cleveland back in 1998 and John Syzmanski was looking at something like an old issue of Goldmine magazine and saying that it was frustrating to see how cheap records USED to go for. And now, I myself understand that feeling, as I've obtained many of the records on this list for many multiples higher than their 1987 going rate.
As a twenty-plus year acolyte of Michigan garage rock records, the sheer depth of what was on offer here in a single auction is downright staggering. The fact that the absolute godhead single by the Keggs (which seemingly landed on most everyone's radar with its inclusion on the 1985 issue of Back From the Grave - Volume 5) is available here, barely two years later...boggles the mind. This is a record of which only 100 copies were pressed and even now, 53 years later, there are only believed to be about a dozen copies known in collections.
Furthermore, the understanding that Death, while not really considered a "garage" band, per se, yet still existing under that same spiritual umbrella, was known and on offer to collectors this far back...it definitely raises my eyebrows. Ever since I'd become aware of the band, roundabout summer 2006, I was aware that the band was three Black brothers from Detroit.
But as the Death single itself has no pictures along with it and the label obviously doesn't say "these guys are Black" I to this day am still curious as to WHO figured out that the Hackneys listed on the Death single were the same Hackneys listed on the psychedelic Christian music on the 4th Movement records (which DO have pictures and, you know, they're Black). In my mind, the people who enmeshed in Hendrix-worthy fuzz guitars praising Jesus don't often intersect with those geeked about a proto-punk monster taking aim at politicians. The auction doesn't answer that question of who put two and two together in regards to Dannis, David and Bobby Hackney, but it does show that at least amongst the deepest die-hard collecting circle, the "Politicians In My Eyes" single was already on their radar.
Closed out with the auctioneer's wantlist and a guide as to labels that he's interested in "most" records from (he apparently did not care for soul or country music) and this just serves as a fantastic snapshot of a moment, maybe ten years or so into the actual garage "collecting" game, which seems downright quaint now in the light of instant informational access and purchasing power provided via eBay and Discogs. Remember...this was all done exclusively through the US Postal system! At this point I am aware of just ONE dealer who still operates in this manner, prior to COVID still mailing out hard copies of his auction list...where protocol dictates you send a letter listing your bids, include a check as a form of pre-payment (as you almost certainly will not win ALL of your bids, you will receive a refund check back) and then wait a month or so to find out what shakes out. So archaic, but hell, once a year, I'm up for it.
Apparently Mr. Stricker who compiled this auction passed away back in 2007 and it's a shame because based on these few pages here, he seems like a guy I would've really liked to know. 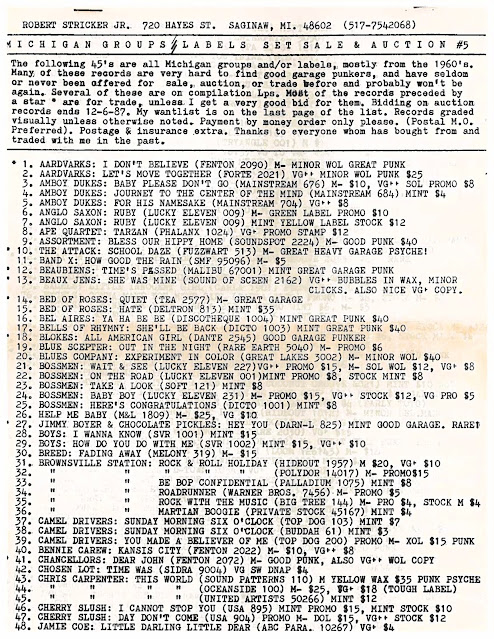 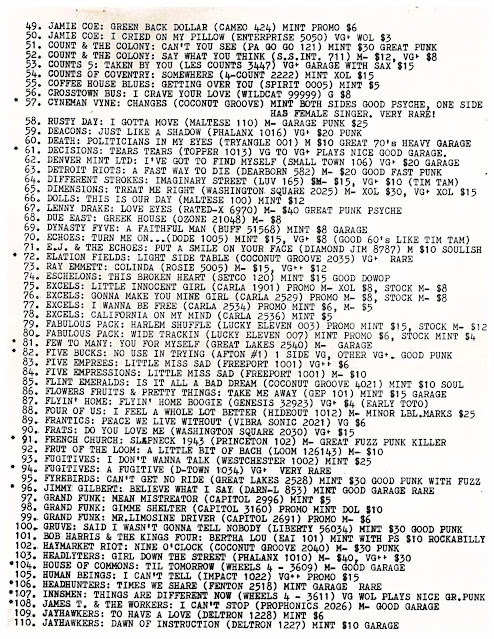 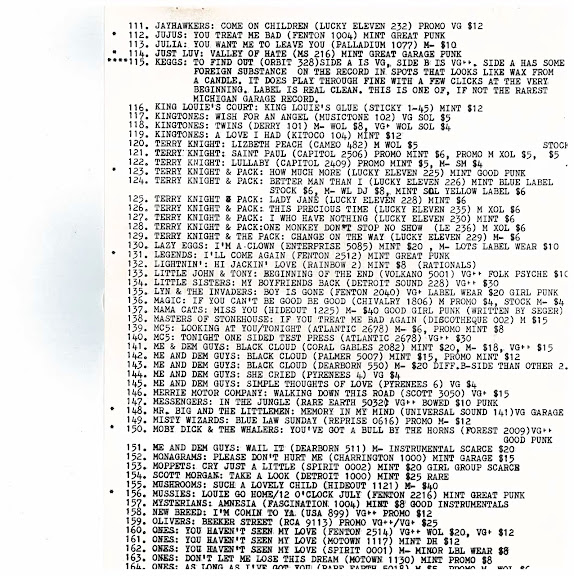 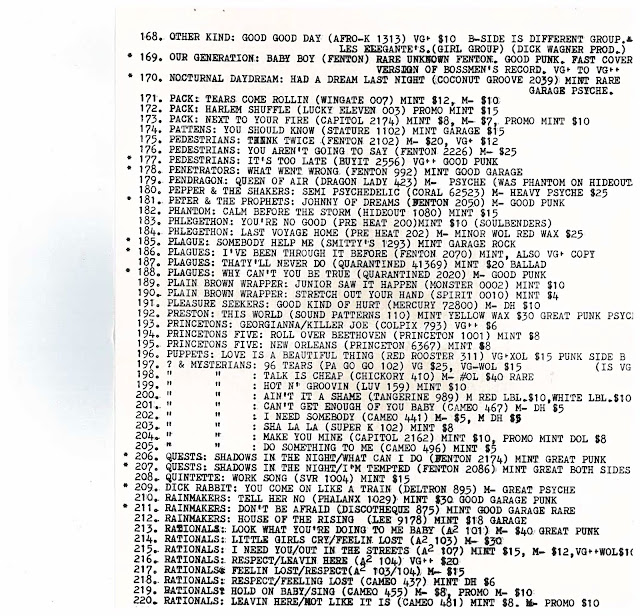 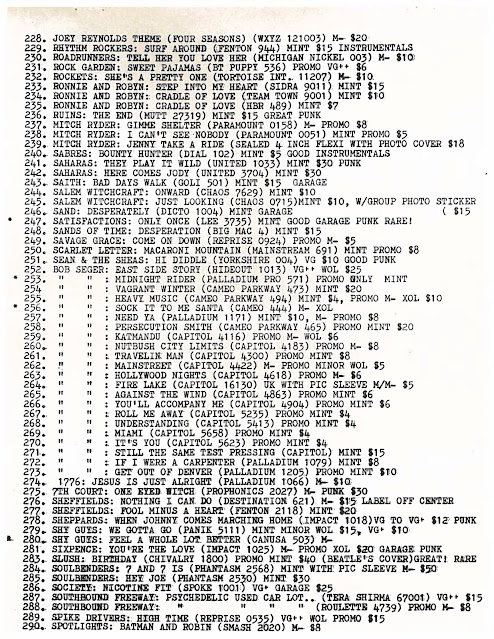 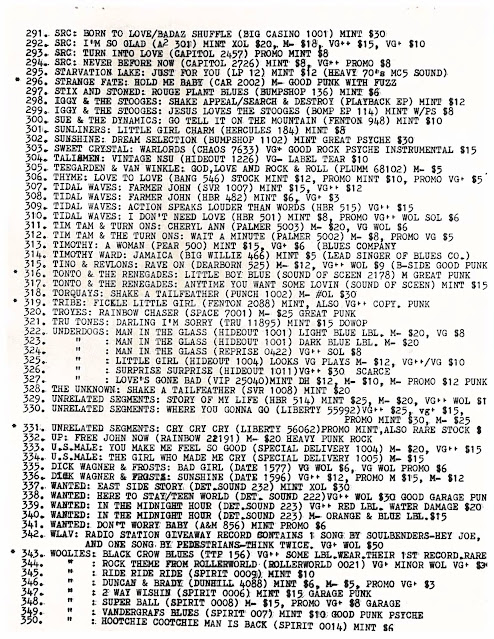 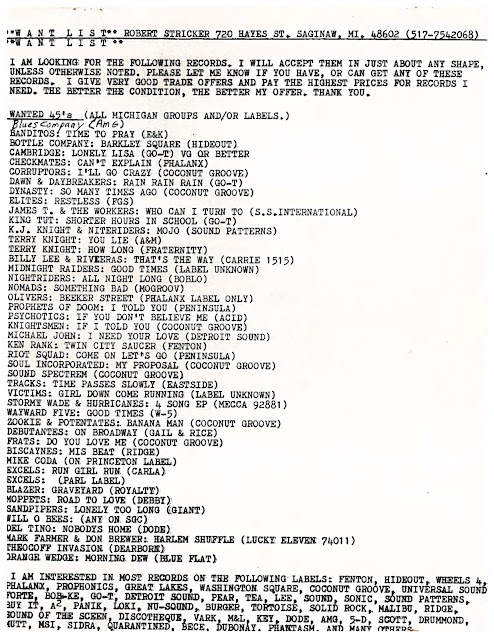 Posted by cassdetroit at 11:59 PM No comments: