The White Stripes
“The First Show: Live on Bastille Day”

All of this is from memory. Sometimes memories are false. But anything here is not purposefully false.
I have far more explicit memories of the show the White Stripes would play a month later, their first “full” show with proper setlists and flyers and more than ten folks in attendance.
To me, I remember this as a one-off, as a lark…that Jack and Meg went to the Gold Dollar open mic with little-to-no warning to just test out what it was like being on stage.
As Jack recalls in the Under Great White Northern Lights interview (some of this may be unpublished…you heard it here first!)
Mr. Historian:  What do you guys remember, I wasn’t there, but what do you remember about the first show you played, open mic night at the Gold Dollar?
Jack: Open mic night at the Gold Dollar, I remember there being maybe just a few other people, like 7 or 8 other people there and Neil the owner, and I think all the other bands were from Downriver they were all from Wyandotte or something.  Which is pretty funny they drove all the way to play open mic night in the Cass Corridor.  It was only a three minute ride for us.   We played three songs.
Mr. Historian (Ben):  What three songs?
Jack: I think "Love Potion #9"
Meg: Yeah definitely.
Jack: Which we changed to "Love Potion #10"
Meg: Was it "Screwdriver"?
Jack: Maybe "Moonage Daydream."  "St. James Infirmary" maybe?
Ben: It wasn’t "Moonage Daydream," I want to say maybe "Jimmy the Exploder."
Jack: "Jimmy the Exploder," "Screwdriver," and "Love Potion # 10"?
Ben: Yeah.
Jack: Anyways I remember the band after us did a cover of "Born to be Wild" [laughs].  And after we were so drunk and wasted, I was sitting there with Neil and they started the song, which sounded pretty note perfect, but then the singer says “get your motor running head out on my asshole!”  Which we didn’t seem to understand what he meant by that [laughs]. Not a typical impersonation of "Born to be Wild", maybe Downriver in Detroit, I don’t know [laughs with Meg].
Ben:  So then after that you guys did, like a month later, you guys played two more shows at the Gold Dollar.
Jack: Was it that week we played or a month later?
Ben: So that first show would have been Bastille Day July 14, 1997.
Jack: Ok.
Ben: And then the shows with Rocket 455, and the Henchman were the 14th and 15th of August.
Jack:  Oh I seem to think we went to go do open mic night the week before we went and did those shows
Meg: Yeah I thought so too.
Jack: Because we were worried that we weren’t going to know what we were doing when we got up there.
Jack:  Maybe Bastille Day was our first practice Ben?
Ben: Maybe?
Jack: I can’t remember, but yeah then we booked the show with the Hentchmen outside the Demolition Dollrods show, we had a copy of the album out in front of the Magic Bag and the Hentchmen walked by.  I said hi to them.  That was the first time we met them.
Meg: That’s right.
Jack: Remember I gave him my upholstery card.  He wasn’t sure about booking us for the show, but he did say he may have some upholstery work for me in his Piermont wagon.
Then we booked a show with the Hentchmen first.  And then we booked a show with Rocket 455 after that, because we went and saw Kitty Wells (to Meg) remember? Play at that old senior citizen center?
Meg: I don’t think I was with you.
Jack: Went and saw Kitty Wells with Dan and Tracee from Blanche, we were starting Two Star Tabernacle at the time.  Dan, Tracee and I, and Damien Lang who drummed for the (Detroit) Cobras, and then we went and saw Kitty Wells at this senior citizen community center, and we met Jeff Meier from Rocket 455, so we booked a show with Jeff opening up at the Gold Dollar after the Hentchmen, but we actually played with them first, so they both are always laughing and arguing over who we played with first, where our first show was.  But the first three shows were at the Gold Dollar, that’s for certain.  An old... it used to be a drag queen bar in Cass Corridor.
Anyway, folks have said it before, but it cannot be stressed enough…damn-near EVERYTHING that made the White Stripes “THE WHITE STRIPES” exists right here, day one, without waver. Yet they had absolutely NO idea it would ever get this big. From another interview I did with Jack back in 2003…
BB: I remember you saying, when the White Stripes first started playing “Two Star Tabernacle, I can see us getting really huge, the White Stripes, maybe we’ll do a record or two, be some kind of cult band.”  It’s kinda changed since then, don’t you think?
JW: I don’t remember saying that, but I guess it’s just the opposite.  The Two Star 45 is like a cult thing.  The White Stripes have become some insane institution…in some sense.

The idea of a two-piece band, wearing red-and-white, with a childish approach to their art was solidified on this day.
They were childish because of the extent of Meg’s skill on drums and because of Jack's intent on guitar.
When TMR obtained multi-track masters of a bevy of White Stripes and Jack White-related live performances from the Gold Dollar, this show was, unshockingly, not available. The master of this performance exists as a cassette copy, mixed live by bar owner/sound engineer Neil Yee and handed to Jack immediately after the performance. Important stuff.
From there, this tape was deemed LOST (by me anyway) for a few years. In the pic below (pulled from the legendary White Stripes / Arthur Dottweiler video clips) you can see a big huge metal Coca-Cola sign on top of the refrigerator. That sign was there forever. It wrapped around all three exposed sides of the fridge. Behind THAT was an old-fashioned metal bread box that held all sorts of badass historic tapes. Not gonna lie…the lone complete copy of the Vegetarian Cannibals master was in that box. 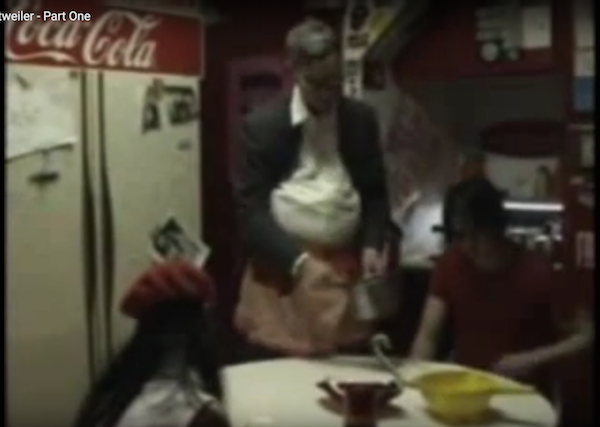 Anyway, when the cassette was unearthed (I wanna guess 2002 or 2003) I remember listening to it and Meg not being terribly pleased with her performance. But she had literally been playing drums for no more than four months, and not on some insanely dedicated rehearsal schedule.
To start the whole performance with “Alright, uh, we’ll just bore ya for two or three songs…” is beautiful. What a start, a disclaimer! Jack’s solo after the second verse sounds like he forgot he had to play one at that point. But the way he exits that portion, with some chugga riffing and a sweet descending measure is excellent and would not appear on the rendition one month later in the first full show at the Gold Dollar on August 14th.
Also, THAT show is burned in my brain because Jack let me make a copy of that cassette early on. For the longest time, that was the ONLY recordings of the White Stripes I had to listen to. So the version of “St. James” from that show is primarily what I think of when I imagine that song.
The last verse struggles for a second to find footing amidst what could be a fake false ending. I would’ve liked to hear it play out with just Jack’s vocals and drums, but this boy will be left to dream.
“Jimmy the Exploder” is what I thought was the band’s “hit” single at the time. So much so that I was quite surprised when Jack told me that “Let’s Shake Hands” was going to be the a-side of their first single. They’d barely even played that song at that point. But Jack let me in on the secret, “I think ‘Jimmy’ is too good for the single. We’re saving that for the album.”
The album? “The balls on him” I thought. No one’s around trying to put out a White Stripes album in early 1998. But as is usually the case, he was totally right and exhibiting just the appropriate amount of foresight. This is why I would wallow in the barely-functioning independent rock and roll underground for years before being brought along for the TMR ride back in 2009.

Jimmy heroes about as complicated a drumbeat as Meg would tackle in the first few years and despite starting off rocky, I like the way that she inverts the beat around the 23-second mark (and the 50-second mark) as it is reminiscent of Scott Ashton's badass stutter beat on the Stooges "Dirt" at the 5:03 mark.

As Jack declares at the ending, "Jimmy the Exploder" is about a monkey who explodes things that are the color red. Or is it things that AREN'T red? "Green apples are gonna be exploding now" lyrics throw me off and I realize that in the intervening 20 years I've argued BOTH sides of argument and cannot remember where I'm supposed to end up.
Ending with “Love Potion #9” which for years was my favorite cover the White Stripes did, despite the fact that by 1998 it had all but disappeared from their set. I have a memory of Jack asking his brother Joe if he could borrow a copy of this song (the Coasters version?) on 45, and it seems like it was explicitly to cover it.
THIS is so pure, so simple, two chords, one additionally thrown in for an accent here and there, Meg’s drums locking on waltz signature, the interplay with the audience, “What he said…one, two, three four!” and NAILING that next note. Wow. If we didn’t have this tape to prove it I would never believe the performance would’ve been so wonderful.
There’s no tangible way to measure how much joy, love, pain, stress and absolute great feelings in my life are ultimately tied to these inauspicious events that happened twenty years ago today. So I’ll just continue to listen, as I have been for the past twenty years, and marvel at what a beautiful sound could be made by two of my favorite people on earth.