Not long after I walked offstage as the hired-gun drummer for opening act Dan Sartain, an assortment of crew and musicians and friends gathered together and took part in a celebratory, raise-the-glass toast, all led by Jack White to mark the end of the run of nine shows in the previous ten days.

What would YOU do if half of your favorite band told you (and ONLY you) it would be their last show immediately prior to taking the stage?

Shocked and having no better ideas, I went and grabbed two pieces of paper. One of them a perfunctory, public-facing schedule posted backstage. The other, more-detailed, sharing much of the same info and privately posted inside the band’s tour bus. 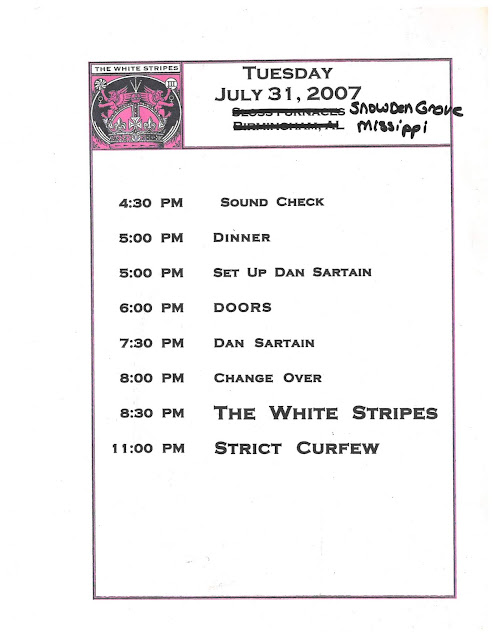 Just typing that makes me self-consciously feel like an ass...more preoccupied with the artifact and ephemera than focusing on the actual feeling of (and living in) the moment. Also, I should’ve at least made the effort to grab a damn camera. 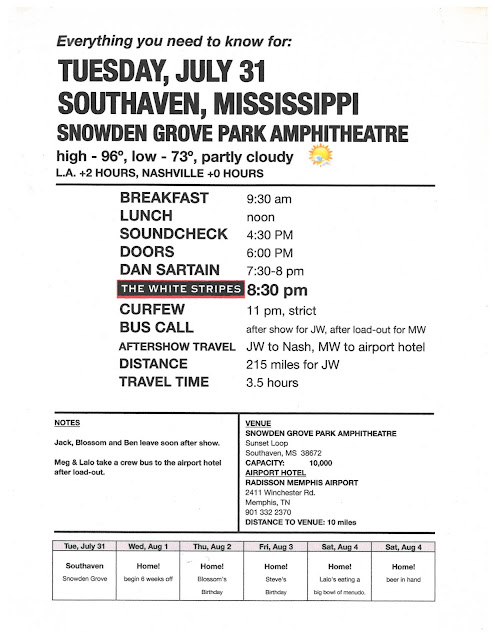 I decamped to my usual side-stage perch and dutifully hand-wrote the scattershot songs that spilled out of Jack and Meg that evening. The White Stripes had never played Mississippi prior to this performance and it's clear the deep musical heritage of the state loomed large in Jack’s mind as he attacked the performance setlist-free. 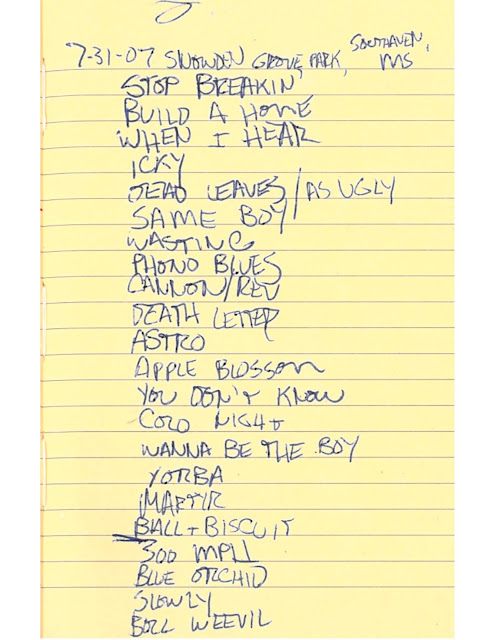 “Stop Breaking Down” was an unexpected opening song. Despite being released in 1999, it had only opened a set once before, just three weeks earlier. The inspiration behind that first opening performance was the band headlining the Ottawa Bluesfest, being met with newspaper headlines that asked “Are the White Stripes bluesy enough to headline Bluesfest?” Seems as Jack’s intention of starting both these shows with the Robert Johnson classic was to leave no doubt to a skeptical homegrown audience of armchair connoisseurs or a lazy Canadian newspaper editor that the band was well-within their powers conveying the blues to the masses. All that was only further buoyed by Jack later throwing in an unexpected tease of another Robert Johnson song “Phonograph Blues” to assuredly placate the ghosts of the Mississippi Delta.

Inspired, one-of-a-kind takes on both “As Ugly As I Seem” and “Astro” now jump out to me as beautiful…each song's last hurrah from the band that birthed them. Exploratory adventures the both of them, proving that no piece was ever finished or finalized or etched into stone. Rather, they were all living, creative works, changing and adapting over the years and begging to be recorded and shared and analyzed by all of you reading this right now.

Jack began the encore by himself, pouring every last drop of feeling and emotive vocal quiver into a solo offering of “300 MPH Torrential Outpour Blues” that was achingly bare. The raw force behind it feels beyond naked...as if Jack had pulled back his own skin to reveal his truest, innermost thoughts, particularly when he changed the lyrics on the fly and sang...

"See there’s three women in my mind that know they have the answer, but they’re not letting go…
What else is new? I’m the only one that seems to care where I should go”

After re-listening to this show for the first time in ages, I feel like only now have I fully absorbed the enormity of that line. Frankly, it just hit me like a freight train to the chest. I was caught entirely off-guard. I couldn’t help but be moved to tears.

Moments like that make me feel this show is the audio manifestation of opposing, equally-powered forces clawing for control of my brain in an id-versus-ego battle of monumental proportions. On one end I’m mourning, absolutely fucking hurt that this huge presence in my life, my occasional reason for being, my family both by blood and by choice…just ceased to be. And yet at the other end, I am so goddamned lucky that the White Stripes ever existed at all...that people even paid attention, that the band was able to make a lucrative career out of their passion, out of art and that I had a side-stage seat to the entirety of their existence.

These are feelings that have never reconciled themselves. I doubt they ever will.

After the completion of a bombastic, career-defining version of “Death Letter”, Jack poignantly says “Son House, thank you for finally letting me come home.” House was a passive participant in this matter, having died in the band’s hometown of Detroit in 1988. But Jack’s comment has seemingly little to do with any physical structure...what he is saying is that Son House (and to a larger extent, blues music in general) provided both he and Meg with an avenue to pursue their artistic vision. In this sense, home is not spoken in the predominant, noun usage of the word to describe where one lives, but rather in a more colloquial, adverbial sense meaning ‘deep, to the heart.’

Ending the set with Leadbelly’s “Boll Weevil” and the singalong chorus repeating “he’s looking for a home” only further drives this point, well...home. The White Stripes were only able to become THE WHITE STRIPES because of the blues. Able to find their voices, to spread the word in a way that was seeming antithetical to two white kids born in Detroit in the 1970’s. Blues was the language, not chosen, but seemingly divined, to best communicate themselves, to express, to converse, to paint this masterpiece.

In that same way...we are all always looking for a home. For where we belong. Where we can be ourselves. Where we are free to do what we need to do. For a way to be. For a conduit to something bigger.

Upon the completion of the set, with a backdrop of Who-like synth arpeggiations singing out into the night, Jack sincerely says the following...

I can think of no better epilogue for Jack to punctuate the White Stripes last-ever live performance. Each thought a simple sentence that, upon closer inspection, opens up to a wider meaning...not just spoken to these folks in suburban Memphis on a Tuesday night. Rather, they speak to all their fans across the world. About the journey. About patience. About action. About appreciation. About presence. About gratitude. And ultimately, about the blues. Which is, arguably, all it was ever about.

In the intervening twelve years I’ve had countless conversations with Meg White. And I have never once, not for a moment, even considered asking her what was going through her head that night in Mississippi. To me, she has found her home and that is all that matters.

Posted by cassdetroit at 6:33 PM 4 comments: