So the drive home for the holidays was a dream. I flew the girls and mother-in-law up to Detroit and packed the family Flex with sundry goods and a smattering of Christmas presents which would all get wrapped at the last possible moment before their opening. So that left me, paternity leave winding down, with a solitary drive from Nashville to suburban Detroit. This was my last stand.

There were drive through A&W cheese curds. A stop in Cave City where I bought switchblades, stiletto/lighter combos, brass knuckles and a $16 crossbow from a kind man who had no legs. Arby’s.

But the highlight for me would be hitting Shake It Records in Cincinnati. I hadn’t been since Dirtbombs tour ’08 and some time to just decompress flipping through those stacks would be a perfect halfway point celebration.

Man, Shake It Records is soooooo perfect. I love the place hardcore. Exactly what a record store should be.

So I stock up…the 7” dollar bin is beautiful, a copy of Cope’s Compendium, Manson Family LP, a used Komeda LP, and other assorted slickness all happily fill my bag. A cursory look through the White Stripes/Jack White section turns up a copy of the 2xLP live at Third Man Vault #14 release. Priced $45. “Not bad for a used copy,” I think to myself.

But something feels off.

“But wait a minute…we didn’t just print the photo” I internally monologue (and yeah…totally different image underneath the lenticular. Surprise!)

The entire thing is a super-high-gloss that I don’t recall us ever using on any release. As the person who was probably most involved in the total sum of the parts of this package, my brain is really confused and taxed at this point, unable to really figure out what the fuck is going on.

Thankfully packaged in a resealable plastic sleeve, I open the baby up to examine more closely.

I peek into one of the jacket pockets and see a TMR 7” company sleeve with the Blunderbuss Demos single tucked inside.

“Well who would go through the trouble of all THAT versus just making the 2xLP?” my brain rages on.
Finally, the only true indicator I can ever trust or believe in…the run-out groove etching.

The dead wax of the LPs…nothing. And shitty center labels on top of it. The single says…MADE IN UK!

Then and only then did it finally hit me…WE’VE BEEN PIRATED!

This just wasn’t a run-of-the-mill bootleg, where someone takes an unauthorized recording, radio session, singles compilation, puts their own artwork together and presses it up in the “fan club” intention. No…someone went through extreme pains to try and match everything on an authorized, legal release and pass it off as legitimate. This is pirating. This is counterfeiting…the kinda shit that organized crime partakes in with Louis Vuitton bags.

The initial feeling is incensed. That quickly subsides and I feel…flattered. In some weird way, I feel like this is a sign that we’ve made it. That the Vault has really established itself. A wry smile crosses my face. I’m happy about the existence of this, but not happy about it being sold and potentially fooling folks.

So I bring it up to the counter, ask for the big wigs, explain the deal to them and they’re legitimately intrigued. I’ve heard plenty of stories of artists outright TAKING releases of this nature out of record stores. I ain’t that bold (or the artist) so I said to them, “Listen, please don’t order this again. I want this record, but I will not pay $45 for it. I’ll pay your cost.” Jim and Darren Blase, brothers and co-owners of the shop were completely understanding, solid dudes of the highest order who were more than conciliatory in their offer.

One of them grabbed a box sitting behind the counter, a collection of detritus, oddities, forgotten ephemera and just general shit fished out of LP jackets. After rooting around for a second he pulls out what I surmise is a 1970s era American Airlines luggage tag. Written widely on it is “Bo Diddley Archer FLA.” I take all of a half-second to recognize “Oh shit…that’s clearly hand-written by Bo Diddley!”

Being the dudest of dudes, Jim says “It’s yours. Take it.”

So Mabel’s first Christmas and Violet’s fourth were beautiful and full of happy memories made with family and friends and the framed Bo Diddley luggage tag will serve to remind me of that in a odd, roundabout manner, as an indirect showcase of how we got there. 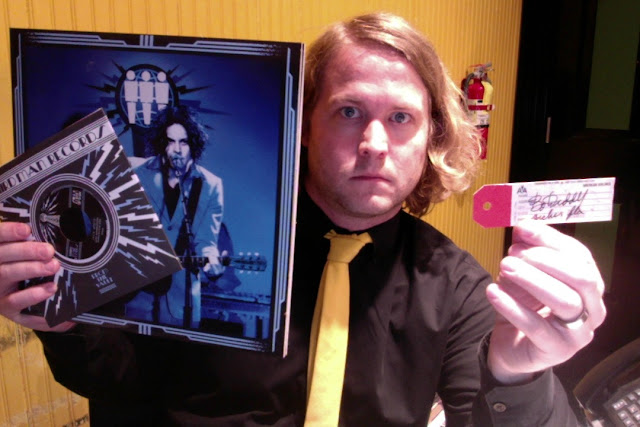