How A Letter From A Failing Independant Record Label Buoyed The Self-Esteem of a Clueless 15-year-old Virgin and Set Him on a Path of Vinyl Righteousness... 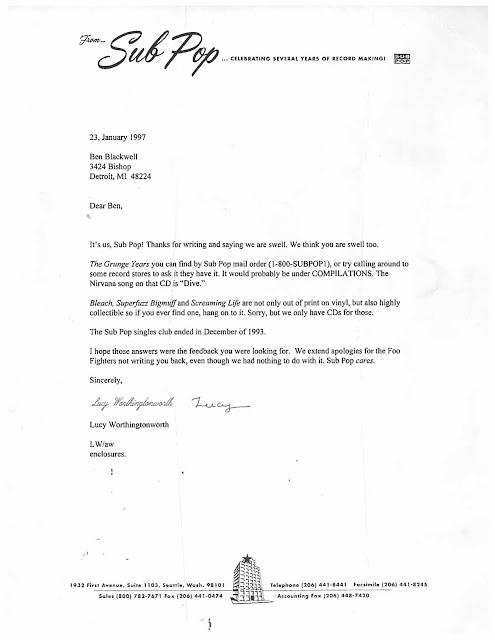 Pulled this one out of the basement recently and was shocked at how responsive, thoughtful and courteous the entire conversation was. When I emailed some of my friends at Sub Pop, their initial response was "Uh oh, how mean a reply was it?"

But this simple letter, along with some "Powered by Sub Pop" stickers, two Eric's Trip pins, something promotional for the Blue Rags (guitar picks? I can't exactly remember) was just the slightest nudge I needed to venture further into the world of independent record labels and mail order. I was 15 years old. I was already asking for classic albums on vinyl. I was salty that the address on the Foo Fighters first album never wrote back to me.  I thought I was clever telling Sub Pop they were "swell."

I can never remind myself enough, but the smallest gesture can sometimes have the largest, most unexpected impact. Deep down inside, I don't think I would be on the exact path I'm on today 21 years later had I not received such a caring letter from a record label I adored.
Posted by cassdetroit at 4:51 PM No comments: