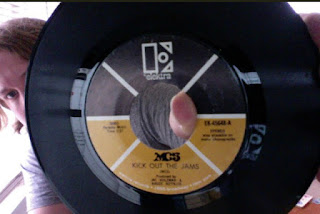 scum stats: I'd bet Elektra pressed 100k of these back in the day, but this specific variation, man, maybe 5000? possibly even less

Rare records that are not expensive...this is one of my favorite and most frustrating exploits.

A few years ago, I noticed a copy of this single for sale on eBay. Upon first glance, it was just like the hundreds of other copies of this single that I had seen over the years. Big whoop.

But upon closer inspection, I noticed the slightest differences. The stylized band name/logo was a little thicker than usual, the song titles are in a thin script versus the usual bold. And BMI is in parentheses on this one. Some other line-breaks are different, more bold/thin changes, but ultimately, this is entirely inconsequential shit that absolutely no one should care about.

So of course, that's why I care.

The copy I had seen on eBay was up there for MONTHS at a Buy-it-Now price around $40. And I just never pulled the trigger. The moment it sold, I thought, "Shit, why did I wait?"

That was two years ago and I've been obsessively checking the listings for this single since then in hopes of finding another. I emailed the MC5 super fan in Switzerland trying to find a copy. He referred me to the PREVIEW pressing of this single (exclusively given out to attendees of the MC5 performance at the Fillmore East in New York and ultimately thrown at the band by the revolutionaries in attendance when the band arrived in a LIMOUSINE) but I already had two copies of that.

To me, this single is some sort of weird added confusion to the story of the MC5 being dropped from Elektra because they'd placed an ad that said "Fuck Hudsons" in the local underground paper and included the Elektra logo. Hudsons was the local Detroit department store and in response to the ad, they threatened to pull ALL Elektra product from its shelves.

I've heard alternate theories that the album was not as successful as the label had hoped and the Hudson's controversy was just a convenient out for them. But the fact that there's a SECOND, LATER pressing of this single seems to fly in the face of all that. I mean, I guess you can drop a band and still keep the single in print and change the layout, but it still seems really odd. And ultimately, that later pressing seems somewhat unnecessary in hindsight, as it just never really turns up.

The style of this label layout is more in line with singles that Elektra had released in the summer of 1969, months after the band had been let go. The later version I have was pressed at Monarch Records in Los Angeles while the earlier version was pressed at Specialty in Pennsylvania. There's even a red/white/black color variation that was pressed at Columbia in Terre Haute, Indiana. And that "preview pressing" explicitly "for the brothers and sisters of the MC5" was also pressed at Specialty, you know, so you can update your scorecards at home.
Anyway, in the post third baby haze, a copy sold on eBay that I missed and I was PISSED. Started combing the listings more regularly, even contemplated messaging the seller of ALL copies of the single listed on Discogs (approximately 19 at the time) and asking them if "BMI" was in parentheses or not on the label of the copy they were selling. Desperate times, desperate measures. I'm convinced no one else really cares, but in some strange way, that makes me care EVEN MORE.
Sure enough, a few weeks back, I found a copy. $7.99, Buy-it-Now. That purchase felt so fulfilling. The hunt, you know, was worth it. This specific version doesn't even have a dedicated Discogs listing, so the moment I stop going down this rabbit hole, hopefully I can make the update myself.
Side note: the "preview pressing" is actually an alternate take of "Kick Out the Jams" but honestly, even thought most folks identify with this as the call-to-arms, best-known work of the band, I've always preferred "Looking at You." I would've loved to hear a studio album from the MC5 at that high point of their career (ie, late 1968), but it wasn't meant to be. And the SINGLE mix is slightly different and slightly edited from the album version...most noticeably the substitution of "brothers and sisters" for "mother fuckers" after the titular intro, and said expletive the entire genesis of the entire Hudson's kerfuffle.
But I like it enough to have pressings and variations from half a dozen different countries. My pipe dream is that some day, some one will say "thank you for caring" and that all the differences and variations will avail themselves to some greater good and higher importance. Until then, I still need the Mexican pressing.
Posted by cassdetroit at 10:52 PM No comments: