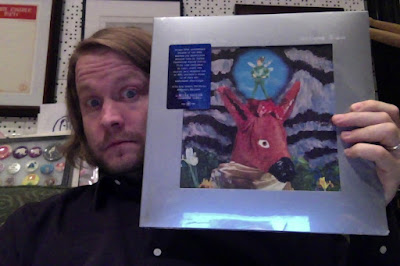 "Antique Glow" 20th anniversary expanded edition
scum stats: 300 UK indie exclusive, 700 US indie exclusive, a whole mess of 'em on black and maybe some super top-secret single digit kinda things still to be revealed to you real heads
The number of albums I love more than "Antique Glow" could be counted on two hands.
Cut to February 2003. I'm still in college, loving journalism classes but bummed that I need to take French, in the beginning steps of starting my own record label and also balancing time in the Dirtbombs.
We're scheduled for a quick West Coast trip centered around a headlining spot at Noise Pop Festival in San Francisco. I made my way into Amoeba in the Haight and happily felt like I was at home. Back at that time, I knew enough people who worked there that someone I was friends with was bound to be on the floor whenever I walked in. It was a nice feeling then...I don't think it's true anymore.
I cannot remember if it was Detroit ex-pat Michael Cooper or SF stalwart Brock Galland who made the suggestion, but it was definitely one or the other who thrust a copy of "Antique Glow" into my hands.
My first impression was...I didn't like the name Kelley Stoltz. Probably to do with my dislike of Eric Stoltz and thinking that Kelley with an "E" seemed pretentious. I was NOT pulled in immediately. But after I was told that ever album cover was hand-painted by Kelley, that he self-released it himself AND that he was originally from the Metro Detroit area...I thought the $12 investment was worth the risk.
Took a minute upon arriving back home for me to throw the record on the turntable, but as SOON as I did, it was instantaneous amazement. The opening lick of "Perpetual Night", just close enough to "Here Comes The Sun" without invoking lawsuits, is the perfect enticement to keep listening. The WARMTH of it all, enveloping like a cozy old blanket, I mean, that's the GLOW we're talking about in the title, right? The lyrics lazily introduce themselves, delayed effects sputter from left to right channel like a shooting star across the night sky, it all feels like it's just going to fall apart and then at 1:52 the drums spring into step and it all locks in and just...makes sense.
The album is just full of moment after pleasing moment like the one's described. Every song, every change, every note...just a damned cornucopia of brilliance. An embarrassment of beautiful music all squeezed onto one album. Like...it feels like it's not even fair to the rest of the world. There's a lifetime's worth of incontrovertibly statuesque songs upending the statistical improbability of all being crammed one next to another across the 14 tracks on the original release. I mean, "Mt. Fuji"? Don't even get me started!
I sat and listened to that original hand-painted version for months before I finally worked up the gumption to actually reach out to Kelley and suggest that I put out a CD version of "Antique Glow" on my imprint, Cass Records.
He wrote back, quickly, and said he'd just signed a deal with Jackpine Social Club to put it out on CD, but that he was excited to try and work on something else. He wound up sending me 5-10 more copies of the LP which I handed out amongst people I trusted (Ian Svenonius, Simon Keeler, Jack White...probably some more I'm forgetting) that helped spread the word.
I wound up releasing a 7-inch single with Kelley in 2006 and by that time, I had passed his music along to Sub Pop, who ultimately ended up signing him to a three-album deal. He'd later go on to open one of the earliest Raconteurs tours, let me do a stint playing drums for him, get a crazy licensing deal with Regions Bank, join Echo and the Bunnymen as a touring member and generally making quite remarkable records in the intervening two decades.
If there's anything that gets me OVER excited about this new reissue is the inclusion of SO MANY BONUS TRACKS. Ho-lee shit. A lot of these I'd heard back in the day as included on his absolutely necessary "Australian Tour EP" and just fell in love with. There really is no song more deserving of inclusion on some breathtakingly cinematic reminiscent soundtrack as "Old Pictures" is (side note: its Kelley's mom's favorite song of his). That along with "Frying Pan" and "Dead John" (inspired by Edward Gorey books) are just so integral to the listening my ears have done. As in....some of my most enjoyable moments of listening I've ever had have been to these songs.
So imagine my extreme happiness in the assembling of this set where Kelley pulls out a half dozen songs from that same time period that I'd never heard...and they are all absolute killers. I mean, "Too Beck" (named so because, well, it's sound too much like Beck) is just brilliant. I am still hopping around losing my mind to it. And "Umbrella" is painfully spectacular...described to me by Kelley as him "trying to sound like CSNY" and keep finding my way back to this song. The plaintive lyrics, not really telling a story per se, but just astutely conveying a feeling. "Don't you make the same mistakes that I made, don't forget to bring your umbrella" is simple at face value, but there's so many other ways to interpret it. "If you're a girl well you might see some mascara run but if you're a field...you will be smiling."
I have not felt so compelled by a song in an unmeasurably long time. Kelley has this way with me. I am forever a fan and the ability to help spread the gospel here is one the numerous joys I get here at my dream job.
Posted by cassdetroit at 9:13 PM

Nice Post!!
Please look here at The LED Bike Wheel Lights are the perfect gift that will make your Valentine's Day safer and look great at the same time.